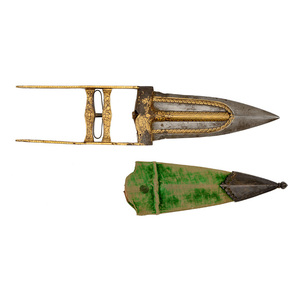 .31 caliber, 5" barrel, 7" blade length.  Extensive gold koftgari work. Late 19th century to early 20th century.  These are most often seen with a hidden dagger.  Green covered scabbard with engraved silver tip. The present example is the only pistol we have encountered. 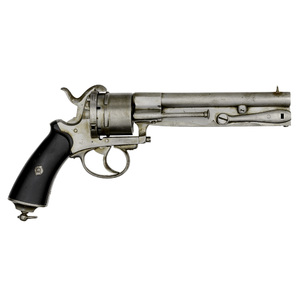 10 MM pinfire caliber, 6.25" barrel with folding bayonet under the barrel and folds out to the left.  Marked under the ejector with a crown and a "G".  Double action.  Ebony grips. 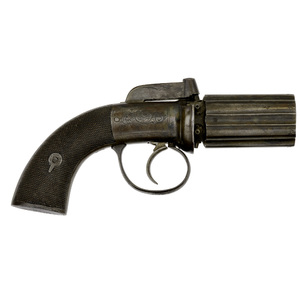 .31 caliber, 2.5" fluted round barrel, six shot, engraved in script on the left side of the frame Smith London.  Frame with scroll engraving. Barrels and frame are finished in case hardened colors.  Finely checkered walnut grips. 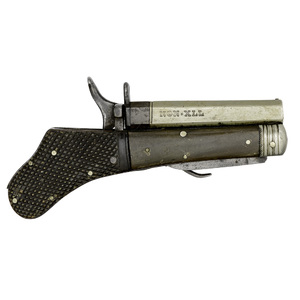 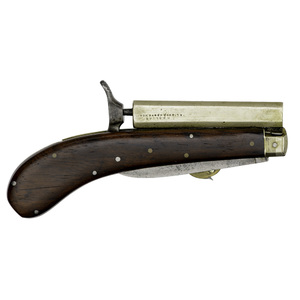 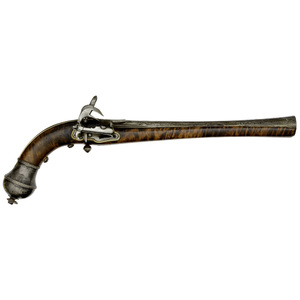 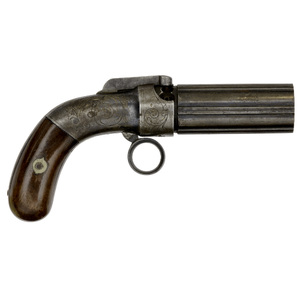 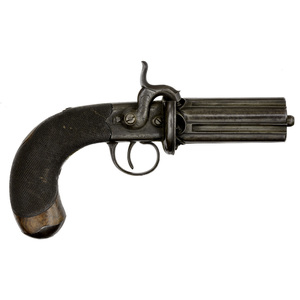 .40 caliber, five shot 3.25" barrels with ribs,  side hammer, recoil shield, engraved frame, safety behind the hammer.  Engraved name Cutler on the top of the frame in a banner. Finely checkered walnut grips. 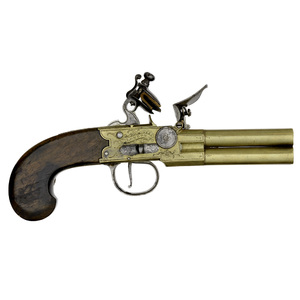 .36 caliber, 3" barrels, engraved brass frame with safety. Engraved Perry in a banner on the left side of the frame, and on the right, London.  Walnut handle. 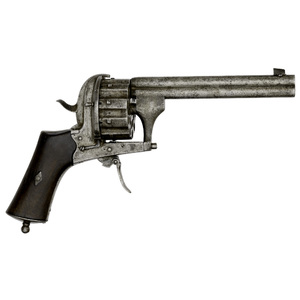 7.65mm caliber, with two superposed 6" round barrel. With proof marks, possibly French, on the barrel and on the left side of the frame above the folding trigger. The double action pistol fired sequentially through dual superposed chambers lined up with the large cylinder with two rings of ten chambers. The revolver has a loading gate and is absent of an ejector rod. With checkered walnut grips, and a lanyard ring on the underside of the butt. 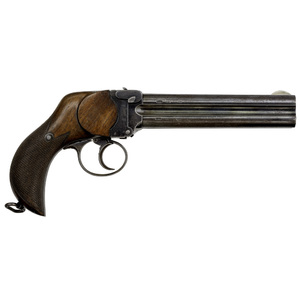 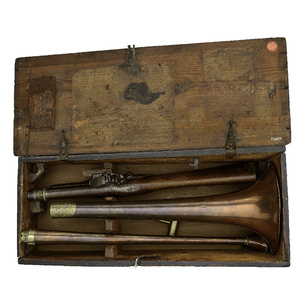 A flintlock signal trumpet with a 9" barrel and a 21.5" trumpet attachment. The top of the barrel has two British proofs and is marked Clio Rickman Upper Mary Le Bone St. London. The signal device features a flintlock mechanism on a half stock with a heavy barrel with a thread attachment. A large tapered copper trumpet screws on to the barrel and acts as a loud signal when fired. The copper trumpet has a brass plaque attached that features a British two-lion crest. The plaque reads The King's Royal Letters Patent / Fitzgerald's Patent Signal Trumpet / Sold By Appointment / Tho. Clio Rickman / Upper Mary Le Bone Street / Sole Vender. The stock and barrel are housed in the original fitted box and include a shot measure and a 26" copper mouthpiece attachment for the trumpet. The interior lid of the box is dry-mounted with the original paper directions and description, printed in English and French. 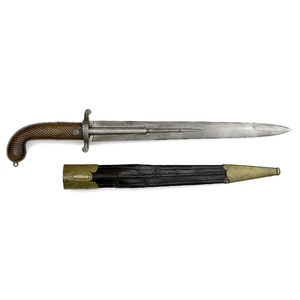 .38 caliber 3.875" long round smooth bore barrels (2) mounted on either side of a 14" spear point knife blade. Upper guard doubles as pair of percussion hammers, which when cocked reveal the two percussion nipples and pair of folding triggers which descend from the grip. Lower quillons marked "TI" on one side and "1847" on the other, with upper quillons/hammer spurs marked  "33" on one and with a crowned/K Belgian comptrollers mark on the other. The matching "33" assembly number is found on the reverse ricasso of the knife blade, and the same crown/K proof is found on the obverse ricasso. Grooved pistol-gripped stock is 5.125" long, with the overall length of the knife pistol about 19.5". Leather scabbard with brass mounts and frog hook at throat. 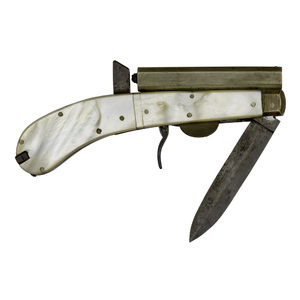 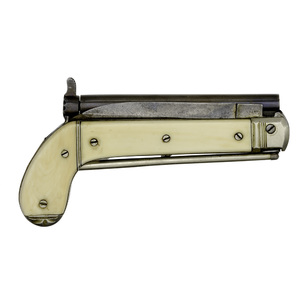 .22 caliber with 4" round barrel and 3.375" spear point knife blade.  Blued finish with German silver mounts and ivory pistol gripped scales. Additional tools include a brass-tipped ramrod and an auger bit. 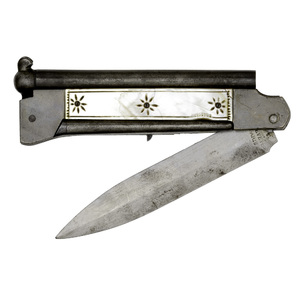 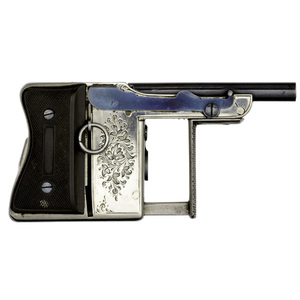 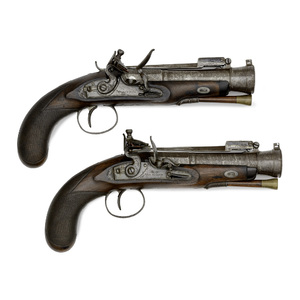 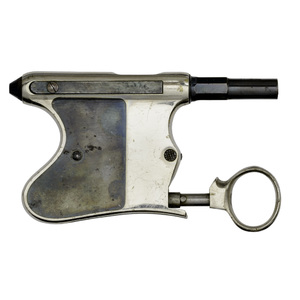 8mm with 2" octagonal-to-round barrel. Blued and nickel finish. Bottom barrel flat and ring trigger marked with a sideways 7 and the number 99. The left barrel flat marked with the serial number 044. The lower left of the grip is marked MADE IN ITALY. Unique late 19th century Italian designed, magazine fed, squeeze cocking palm pistol that relies upon the action of squeezing the projecting ring to operate the action, load a round into the chamber and fire the pistol. 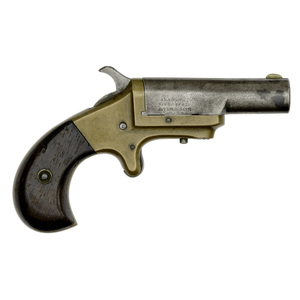 41 RF caliber, 2.5" round barrel, S/N 3742, marked on top of the barrel 'NEVER MISS', on the right side of the barrel J.M Marlin New Haven CT Patent in three lines.  Brass frame with rosewood grips. 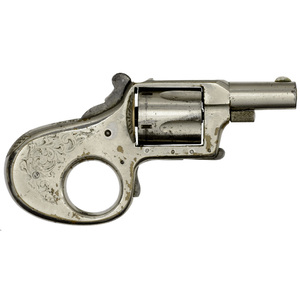 Reid Model No 2 "My Friend" Knuckle-Duster

.32 RF, 1.75" round barrel. Single action, spur trigger revolver with 5-shot cylinder. Serial number 13380. Face of cylinder numbered 3669. Brass frame with plating and scroll engraving. Left side of top strap marked: MY FRIEND DEC. 26, 1865 and top of barrel also marked MY FRIEND. A very scarce variant of the Reid "knuckler," only about 100 were manufactured with barrels during 1877. These guns are typically encountered in the 13330 to 14430 serial number range, and this example falls correctly into that range. 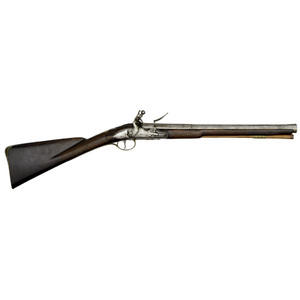 .64 caliber, 16" round two-stage iron barrel with baluster turned rings as the transition. The breech of the barrel is stamped with two London proof marks, and an unidentified proof mark. The rounded lock with round goose-neck cock and rounded iron pan is marked Barbar, and features a unique latching safety device, a variant on the dog lock principle.  The left side of the stock features an inlaid section of brass with a rotating sling swivel, instead of a side plate. The brass trigger guard features an acorn finial. The brass thumb rest features an engraved crest of an arm coming out of the ground holding a flag. Stock with brass tipped ramrod, one brass ferrule and a cupped brass buttplate. 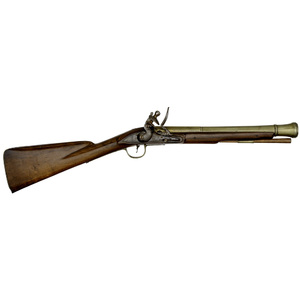 1.25" bore diameter at muzzle, 14.5" octagonal-to-round brass barrel with baluster-turned rings at the transition and muzzle. The top flat of the barrel is marked J. Bailey London.  The left of the barrel breech is stamped with two London commercial proof marks. The lock has a round goose neck cock, rounded iron pan and is marked with a crown over GR proof, a Crown/2 inspection and is stamped Tower. Brass furniture includes a sideplate, trigger guard, buttplate and one ramrod ferrule. Ramrod with brass tip. 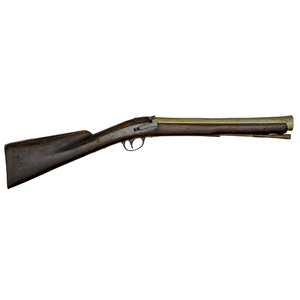 Approximately .70 caliber bore, widening to a 1.25" muzzle, with a 15" round brass barrel with very thick walls, approaching 1/4" in thickness. Mule ear percussion lock marked in three lines, behind the hammer: REMINGTON'S / HERKIMER / N.Y. No other external markings are present. Walnut stock pinned to barrel, mounted with brass trigger guard and ram rod pipes and an iron butt plate.  Overall length is 30.5".

The lock appears to be left over from the contract for 1,000 Jenks Naval carbines manufactured by Remington during 1847-1848 with Maynard Tape primer mechanisms incorporated into the lock. This lock has no primer system, and Flayderman notes that three examples of the Jenks Naval carbine are known with the same markings as found on this lock, and also without the tape primer feature. He postulates that these may have been very early guns, fabricated prior to all of the machinery, etc. for the contract being transferred to Remington by Ames. The presence of other guns with this same style of lock, void the primer mechanism suggests Remington may have assembled this otherwise unmarked blunderbuss as a sample possibly in hopes of selling similar arms to the navy. The trigger guard appears to be from a Jenks carbine as well, absent only the staple and sling ring. An interesting gun worthy of additional research. 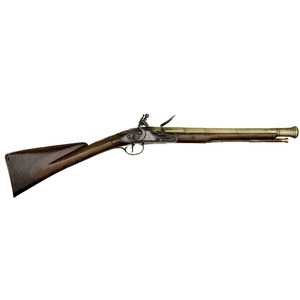 1.25" bore diameter at muzzle, 15.375" round-to-octagonal-to-round barrel with three sets of baluster-turned rings, one at the first transition one at the second and a third at the muzzle flare. The barrel is marked Sandwell Minories London. The barrel is also marked with two British proof marks and a maker's mark of a crown over SS. The flat lock with flat gooseneck cock and rounded iron pan is also marked Sandwell, and has a sliding safety to the rear of the hammer. The blunderbuss is adorned with brass furniture that includes a shell form thumb rest, an engraved sideplate, a cupped buttplate with an engraved toe, and trigger guard with floral engravings and an acorn form finial. Walnut stock with brass cap ramrod. 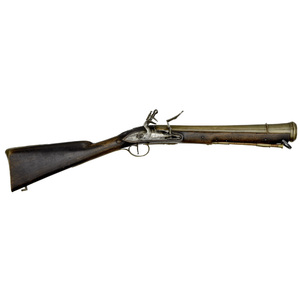 1.5" diameter at muzzle, 14.125" brass cannon-shaped barrel with a single tall turn ring at the transition to the muzzle swell and several turned rings at the muzzle . The barrel is stamped with a London view mark. The rounded lock with gooseneck cock and rounded iron pan is engraved Blair / London. The steel upper tang features geometric engravings. The brass sideplate also features geometric engravings. The brass trigger guard has an acorn form finial, and is engraved with the same crest that also appears on the engraved on the brass buttplate. The stock has a clamshell form carving around the upper tang. The stock also includes two brass ferrules, a brass tipped ramrod, a sling at the fore end and a post on the underside of the butt. 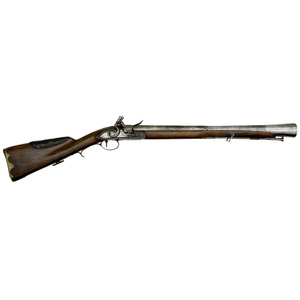 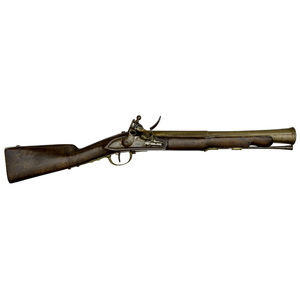