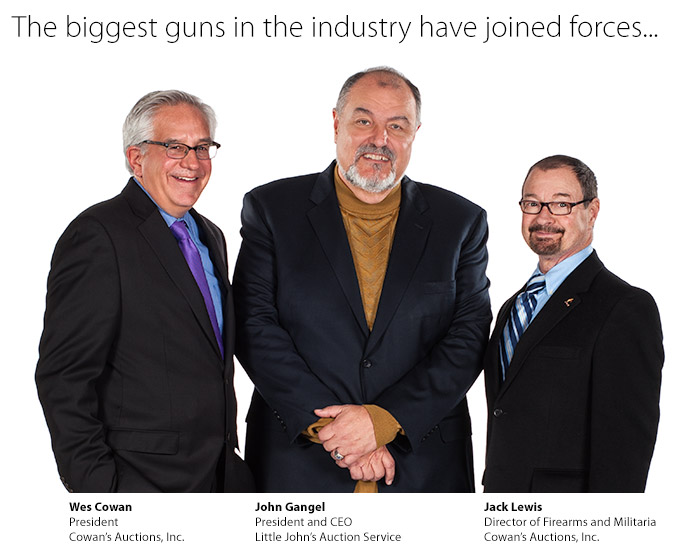 CINCINNATI, OH and ORANGE, CA, November 21, 2014 – Cowan’s Auctions, Inc. of Cincinnati, Ohio has acquired Little John’s Auction Service of Orange, CA, one of the most respected and recognized firearms auctioneers in the country. The acquisition brings together two premier firms with a combined 60 years of business experience and more than $600 million in sales. With the transfer of ownership, Cowan’s Auctions, Inc. will become the third largest antiques firearms auction house in the country, and will create an unrivaled team of widely respected experts.  John Gangel, President and CEO of Little John’s Auction Service will join Jack Lewis, Cowan’s Director of Firearms and Militaria, as a consignment director and auctioneer. Together, Lewis and Gangel will source consignments and represent Cowan’s at all major trade shows.

Gangel has owned and operated one of the nation’s top firearms auction houses since 1979. Wes Cowan, a nationally recognized antiques expert and PBS television star, formed Cowan’s Auctions in 1995, and has been a leading firearms auctioneer for the past decade.

Gangel spurned advances by other auction houses that wanted to acquire his business. “Frankly, I approached Wes” says Gangel. “Cowan’s was really the only company I felt comfortable doing business with. I’ve known Jack Lewis since we were both in our 20s. We share the same principles.”

“John Gangel and Little John’s Auction Service bring the same extraordinary honesty, integrity and expertise that Cowan’s has been providing to our customers for the past 20 years,” notes Wes Cowan. “With the addition of John, Cowan’s will extend their reach across the country. Both Jack and John come from a collecting background, and they probably understand the business better than anyone else in the field. We think it’s a match made in heaven.”

Gangel will host his last solo auction in December 2014. The companies will combine forces to host regular firearms sales in 2015. Next year’s plans call for four live salesroom auctions of Historic Firearms and Early Militaria at Cowan’s Cincinnati salesroom. Cowan’s will also hold several online sales of firearms and ephemera.

Gangel will continue to operate his retail business, Little John’s Firearms, in Orange, California, but much of his time will be spent on the road, visiting collectors and attending regional and national gun shows.  “I’ve been wanting to spend more time doing what I love most,” says Gangel.  “Let’s face it, everyone likes the thrill of the hunt and spending time with old friends. This is the perfect opportunity for me.”