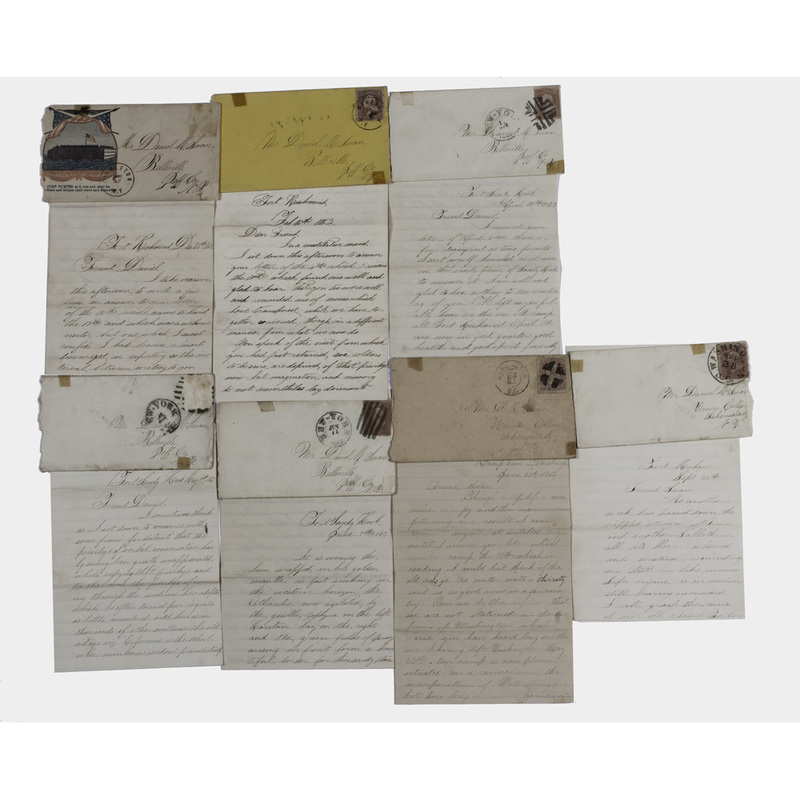 Barely beyond the age of enlistment, nineteen-year-old Alonzo Bullock signed his name on his papers not knowing what was ahead. The Civil War database lists an Alonzo M. Bullock enlisting as a private in Dowignac, MI on August 20, 1861, mustering in to the 1st MI Cavl. Co. On September 7, 1861 and dying of disease before the end of the war.  Further research uncovered a second Alonzo M. Bullock who enlisted in the army at the age of nineteen on August 8, 1862. He mustered into the 10th NY Heavy Artillery Co. E. as a corporal, but mustered out of the army a quartermaster sergeant. Based on the content of the letters it is our belief that the second Bullock of the 10th NY is the author of the letters offered in the lot.

Bullock wrote to his friend Daniel, I am well considering the circumstances am enjoying myself tip-top but as a matter of course I should enjoy myself better in a somewhat different pursuit did not Duty in his firmness demand the protection of our country (Fort Richmond, Dec. 29, 1862). He missed home and the freedom that came with civilian life, You speak of a visit from which you had just returned, we soldiers to be sure are deprived of that privilege now but imagination and memory do not nevertheless lay dormant and hope of the Future allures us on, wrote Bullock to Daniel. God grant that [this war] may at last transpire and secession and the compromise enter their grave and if it would do any good for me to say it I should not hesitate in wishing that the war would close as you have said this spring (Fort Richmond, February 16, 1863). He comically wrote to his friend when his regiment moved from Fort Richmond to Fort Sandy Hook, I do not pretend that I have given a full description of [Fort Sandy Hook] for had I attempted that I should have begun with sand intervened by sand and closed by using sand as sand is the principal and I had almost said the only product (Fort Sandy Hood, April 5, 1863). In all the war was much more “boring” than he anticipated. He wrote,

When I enlisted I thought I understood in some degree at least the hardships I was to undergo did not think to live in some kingly palace or or yet in peace.on the contrary I thought I was to go down South and after having helped to erase Rebellion from the starry sheet of our nation’s pride return to a home justly defended…methinks we might justly speak of hardships on the grounds of experience but as it is in my way thinking experience is yet to teach the 10th A the hardships of war….(Fort Sandy Hook May 4 1863).

Between all his grumblings of the constraining life of a soldier was pride, patriotism, and hope for the future. It most likely pleased Bullock when, toward the end of the war, he and his company finally went out to the front. We experienced some tiresome marching heard at times the whizzing and bursting of the shell over heard and the Minnie ball as it seems to single out its victim…when the contest is over if life be spared we may look back to these days without regret beholding the star spangled banner waving, to us, in triple beauty (Camp Near Petersburg, June 23, 1864).  He survived the war and mustered out of service in June 1865.