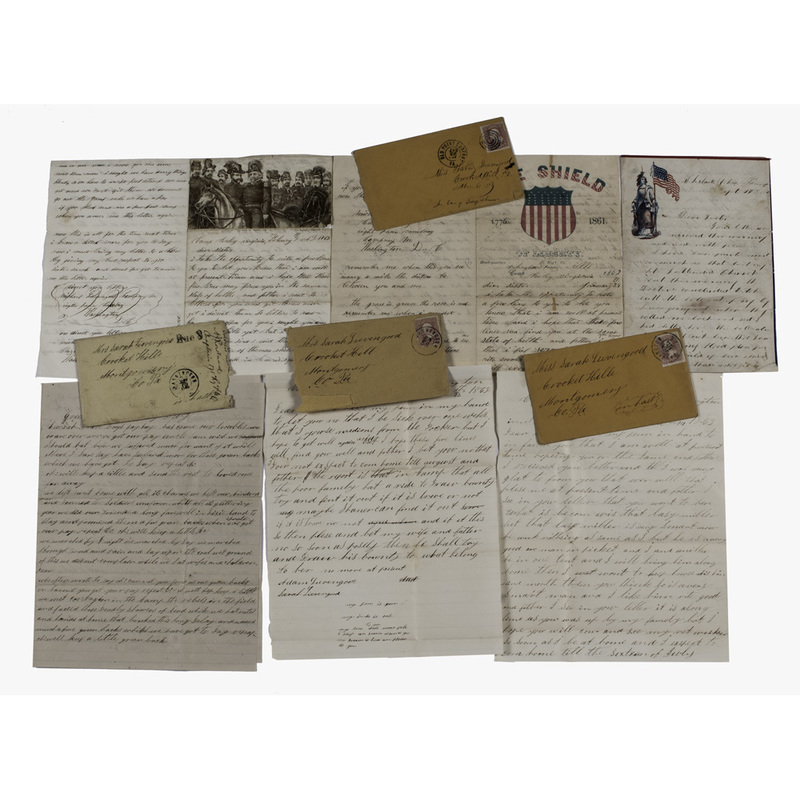 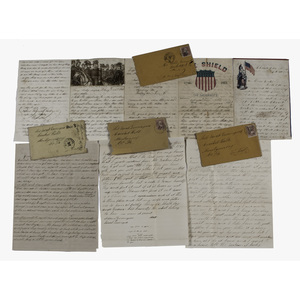 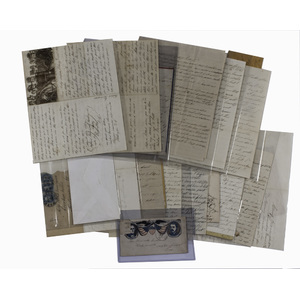 Brothers Adam and Michael Lievengood fought for their home state, but in different regiments during the Civil War. They wrote often to their sister, Sarah.  Michael, spelled "Livengood" on his record, mustered into the 8th PA Cav. Co. M on October 4, 1861.  Adam, erroneously spelled "Levengood" on his record, mustered in as a private of the 175th PA Inf. Co. H on March 6, 1862. From the front, Michael wrote to his sister,

I be in old Virginia for this last tow monts own the other site of the Potomac river it is about tow and a half miles of from Washington…I see more sins I left you and lornd more in this short time then I ever dit before I see thousend acres of land with out eney farms a tole and all the houses and barns burned down to the ground and all the nicest peech argedt spoiled and everythings is upsite down (Camp Presley, Virginia, February 7, 1862).

Adam reported similar fascinating views to his father and sister, wed go on steam board two hundred miles on water, wrote Adam. I hat sed more then 15,000 soldiers and only a ful wite folks except solders but plenty black foks mens ladys and childrens… I hope to sea you I dye and so I hope to sea my dear wife childrens and my father and all my sister and my brother (Camp Suffolk, VA, December 7, 1862). Adam, Sallie, and Michael’s father seemed to be in poor health. Certain that illness gripped him, Sallie wrote to her brother and father,

Father I let you know my sister Rosanna was down to see me today, and she told me that you were so poorly that they did not expect you to live till to this time. Please let me know whether he is living yet or not if death has taken place with him please send him in to Pottstown If he is alive yet, let me know by sending me a letter If death has taken place with him send me a letter first before you send him so that I may know when he is coming (Jacksonville, Dec. 16, 1862).

He survived but the rumors of his death came to Sallie’s door again. She wrote an angry note to him after she found out he was still living but had not answered her letters. Father, I let you know that I was quiet done heared the other week I heared that you were, dead, but then I heard that Rosan got a letter from you again. Now I can sleep again but that time I couldent sleepe hardly any (Jacksonville, August 11, 1862).

The next year, Adam contracted some type of illness. Sallie certainly fretted over her brother’s health when he wrote her from a hospital near D.C. I am sick and the docker sent me in the Hospital on Monday July 5 in Washington D.C. but I not bet fast sick yet and I hope to get well till my time is up, wrote Adam (Harewood(?) Hospital, Washington, D.C., July 8, 1863). He stayed for over a week.  Apparently, his whole regiment suffered the same sickness. Unlike Adam, many men lost their lives to it.

Contrary to Adam’s quiet service record, Michael experienced much more action. He and the 9th Cav. fought at the Battle of Fair Oaks, Malvern Hill, and did reconnaissance work after Gettysburg. They marched to Antietam, encamped at Sharpsburg, and suffered heavy casualties at Chancellorsville. They moved with Sheridan to Five Forks and joined his campaign which resulted in Lee’s surrender.

Both brothers returned home safely to their family. There is no record of either Adam’s or Michael’s muster rolls. It can be assumed that Adam mustered out with his regiment in Philadelphia on August 7, 1863 and Michael mustered out of Richmond on August 11, 1865.

Also included in the lot:

Joseph C. Eves had a very short record of service. He enlisted as a private and mustered into Stewart’s PA Inf. Co. H on July 16, 1864. While at the front he wrote to his friend Mr. Skeler,

I like it down here pretty well but times seames rather dry this week or two the Jonies have all scedadled and we have nothing to do but Picket duty and that is pretty good we once in a wile pick up a couple of deserters but they are mostly from our army (Chambersburg, September 13, 1864).

[2] George Eves, ALS to Mr. Skeler. Headquarters Subsistence District of Blackwater, Petersburg, VA, December 1, 1862.  Research could not definitively uncover his service record. He wrote the letter to his old friend to keep the “Blues” at bay. He describes his dislike of the South and his daily duties on picket.

Barden writes to the doctor about his cough and the lack of funds for the men.

Barden enlisted as private on August 24, 1861. A few days later, he mustered into the 11th PA Cavl. Co. F. He received several promotions, reaching the rank of corporal in March 1862 and sergeant in October 1862. His regiment joined Sheridan’s forces later in the war and fought with him at Five Forks. Sheridan’s successful campaign resulted in the surrender of Lee’s forces at Appomattox, but Barden mustered out of service before Lee’s surrender on August 26, 1864.

Roming mustered in as a private in the 172nd PA Inf. on October 28, 1862. He and the regiment only served for nine months and garrisoned at Yorktown for a time. They mustered out of service on July 31, 1863.

We are not hear all the time in camp we are the most of the time out on guard hospital at town and other places part of the reg must has to moved these tent to tow I that hour company will move before this weak…the boys are all brothers and work to each others hand they a grate set of fellows.

Oliver enlisted and mustered in as a private with the 194th PA Inf. Co. F on September 22, 1862. He fought at Chancellorsville, but died of typhoid fever a month before his regiment fought at Gettysburg.