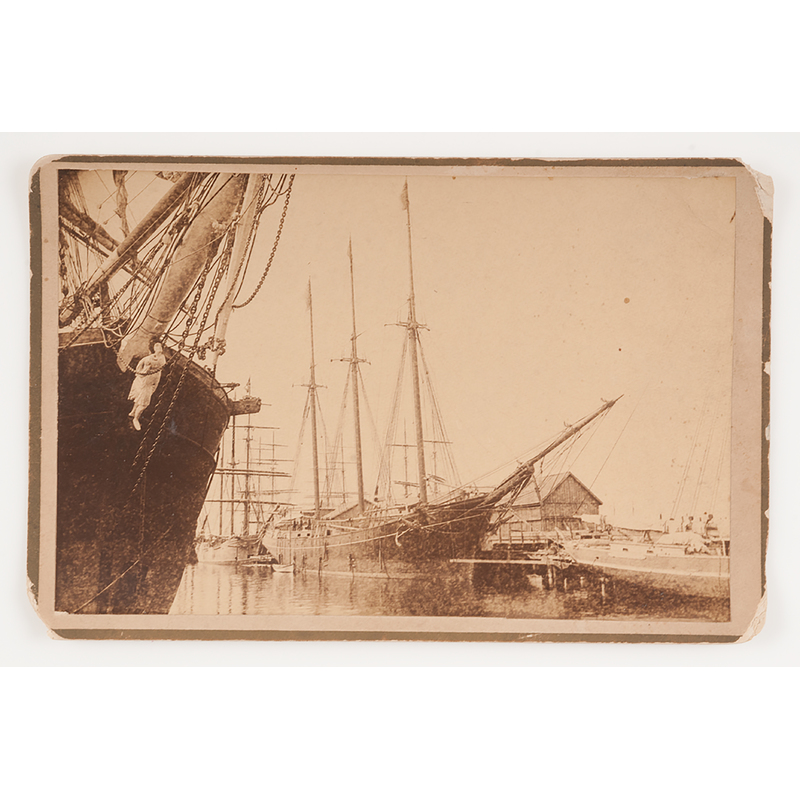 The USS Hartford, launched in 1858, was the first ship of the US Navy named for Hartford, CT. The Hartford embarked to China and other Far Eastern ports, but with the outbreak of the Civil War, she returned home to be fitted for wartime service. Serving as the flagship for Admiral David Farragut, she participated in the Battle of New Orleans, the Battle of Vicksburg, and most notably, the Battle of Mobile Bay, and was recommissioned after the War until 1926. In 1956, allowed to deteriorate and sink at her berth, the Hartford was dismantled.

This photograph come from the estate of Henry Austin Clark Sr. (1865-1951), who was born at 28 University Place, New York, NY, and resided in Flushing, Queens and Southampton, Long Island. He was one of the earliest stockholders of Hawaiian Steamship Company, VP and director of Cuban-American Sugar Company, director of the Chaparra Sugar Company, Colonial Sugar Company and the National Sugar Refining Company. He was husband of Marguerite Dixon Clark, and father of Elizabeth Clark Nicholas and Henry Austin Clark Jr, noted car collector and museum owner.

Henry Austin Clark, Sr., was the son of Dr. Frederick Hamilton Clark, New York City dental surgeon, and Elizabeth Stebbins (Waterbury) who descends from Benoni Stebbins (1655–1704) killed at the 1704 Deerfield, MA massacre. His son, Benjamin Stebbins (1692-1780) was among the first to settle Ridgefield, Connecticut and married to Sarah Mead (1695–1774). The 1777 Battle of Ridgefield took place near the Stebbins homestead.

Toning to photograph, wear along perimeter of mount, with loss at corners.