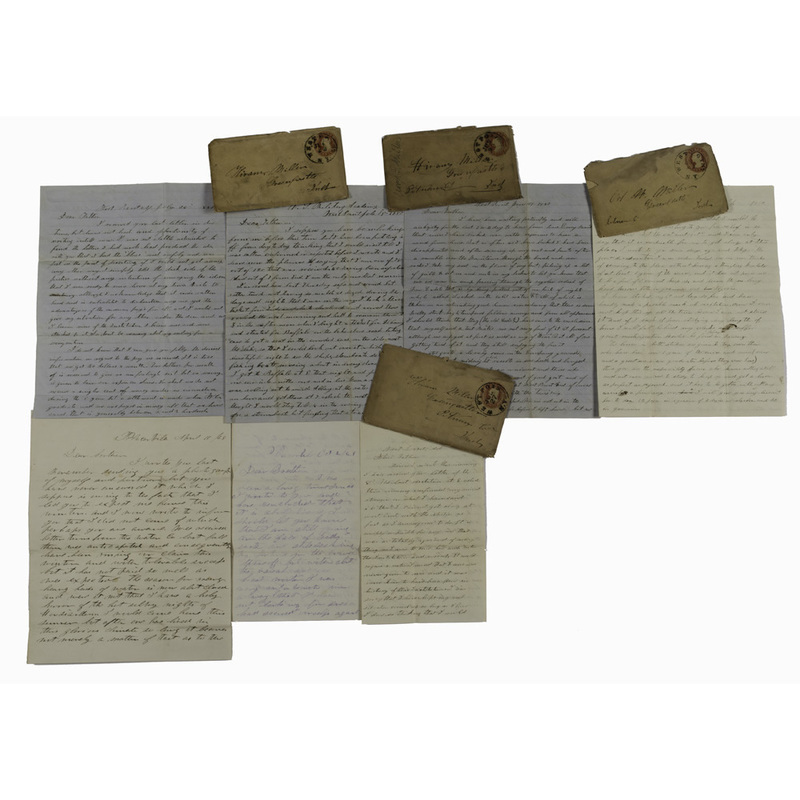 George F. Miller was a bright young man from Indiana. After West Point accepted him, he wrote home, I now have the pleasure of saying that I am one of 78 accepted out of 120 that was received 2 having been rejected. And out of 7 from Ind. I am the only one that remains (N.Y. Military Academy West Point, July 19, 1857). His father, Hiram Miller, was a colonel of the Indiana State Militia and mayor of the city of Greenville. He, like his son, lacked a formal military education, but both felt confident that George would succeed. Unfortunately, the body of work proved too difficult for George. Less than two weeks after his acceptance he wrote home:

I was not a little astonished to find the letters I had wrote had produced the idea with you that I had the “blues” most awfully and was just on the point of deserting if I could not get away any other way. I simply told the dark side of the picture without any intention of conveying the idea that I was ready to come home at any time. I wrote to contrary although I acknowledge that it comes rather hard and is calceolate(?) to dishearten any one yet the advantages of the concern pay’s for all and I would not give my situation for any other under the sun. and as I learn more from this institution I become more and more attached to it (West Point, NY, July 26 1857).

The city of West Point held some charm for George. He explained to his father:

There is only 2 stores in the point one of which is owned by the government and it is impossible to get a single article without an order from supt. And the other is strictly forbidden to sell us any thing whatever or have any thing to do with us in any way and we are forbidden to go into it.

Chewing tobacco is strictly forbidden lest we are allowed to smoke in a pipe such tobacco as they give us rounded we have per minimum from here to do so. If we get permission it is handed to the seupt. And after that we can get tobacco by order at the Commissaries I have not chewed tobacco for the last three weeks but if you will write me a permission to smoke I can have the satisfaction of a smoke (West Point, NY, July 26 1857).

As the school year progressed, so did George’s anxieties. He wrote to his father:

I have studied night and day so far and have hardly made a passable mark at resitatur(?) now I can not keep this up all the time because I can not stand it and if I lack of from studying any length of time I will fall behind my class and suffer great motifycation….It mortifies me almost to death to send a letter of this kind but it must go for the sooner I leave here the better as it will save my health for while I am here I will study my eyes out (West Point, Sept, 1857).

He penned more panicked letters to his father, each more desperate than the last, demonstrating his vicious cycle into madness or depression. In September he wrote:

It is simply impossible for any one that was as totally ignorant of every thing as I was to come here and enter the institution and succeed. It would require a natural mined that I illegible was never given to me and it was never known to have been done in the history of this Institution…I am perfectly aware this will astonish you and mortify you but I am sure it does not more than it troubles and disappoints me but I can’t help it…I have come to the conclusion that I am a fool…but it does not require a fool to fail at this place (West Point Sept 1857)

Deeply humiliated, George dropped out of West Point, but did not return home. He retreated west to parts unknown and became a lumberman in California (West Point, Sept. 1857). A few years after the Civil War began, he enlisted in the army on October 11, 1864 in Sacramento, CA and mustered into the 2nd CA Cavalry Co. D. He participated in Indian fighting until he mustered out of service on March 29, 1866. In a hand barely reminiscent to his letters from West Point and with poor grammar, he scrawled letters to one of his brothers, John R. Miller. In the spring of 1868 he wrote, We received better terms from the water co. last fall than we anticipated and consequently have been running our claim this winter and with tolerable success but it has not paid so well as we expected (Placerville, CA,  April 11, 1868).  He wrote again in October:

I am still living on the face of God’s earth and still seeking my fortune in the bowels there off but with about the usual success.  Last winter I was unfortunate in a way that I was not looking for wee had seemed ourselfs against all of the elements of nature cold, rain, wind and water but fire rather beat as burning our house and everything in it and this just on the eve of a storm making it impossible for us to get back to our clear anymore during the winter But wee intend trying it again this winter and I hope with better success. The clear is about 20 miles along this place and is a very long one (hydawlic) and also very clear for us (Placerville, CA, October 2, 1868).

The peculiar change in penmanship and grammar suggests that George most likely suffered from an undiagnosed mental illness, alcoholism, or that he never truly recovered from his emotional breakdown at West Point.

George hacked away at the giant trees in California until he could no longer swing an ax. It is unlikely that he ever returned to Indiana either out of shame or lack of money. He never married, but his brother Preston moved to California sometime between 1900 and 1910. In 1910, either George or Preston admitted him into a U.S. National Disabled Volunteers Home in Sacramento, CA. His records show that at the age of seventy-six he suffered from senility, indigestion, and hypertension of the prostate. He checked himself out from the hospital in 1914, and most likely died shortly after.