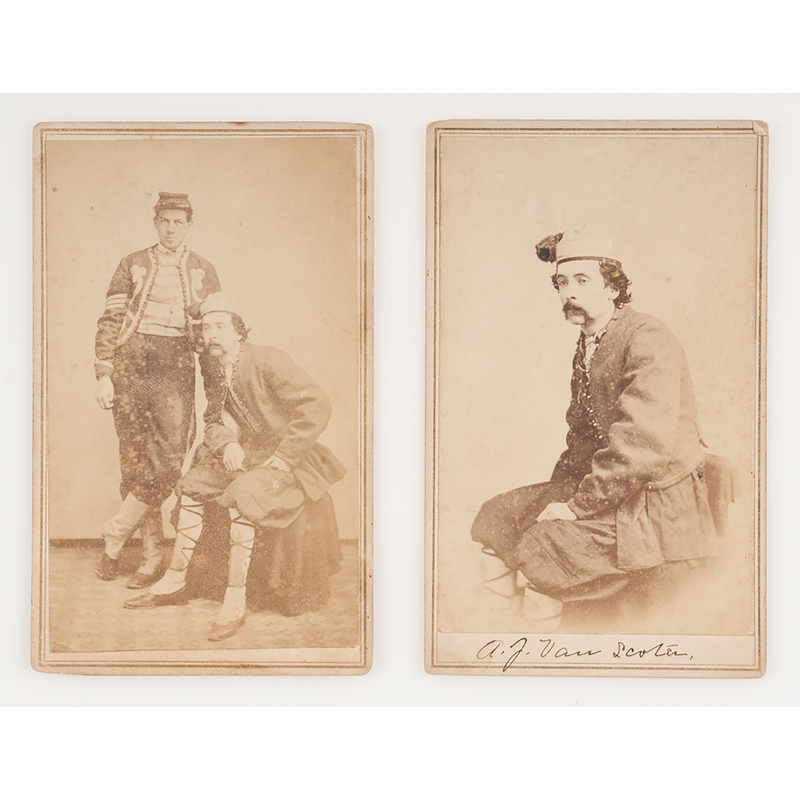 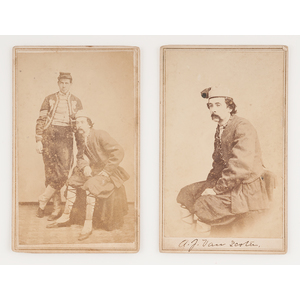 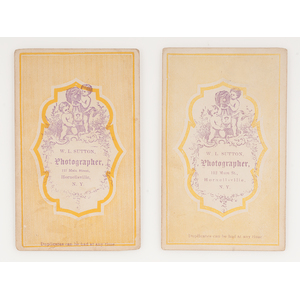 Lot of 2 cartes de visite, each with W.L. Sutton, Hornellsville, NY backmark, including a studio portrait of a mustached man dressed in a Zouave uniform ink identified on mount below image as A.J. Van Scoter (?), and a second studio portrait showing the same mustached man with an unidentified soldier in Zouave-style uniform standing beside him. The Civil War Database lists six "Vanscoters" from New York, including Chauncey Vanscoter, who served with the 74th New York Infantry. The 74th NY's uniform was directly patterned after the French Zouaves. However, we cannot confirm that either subject is Chauncey Vanscoter.

The 74th New York Infantry, the 5th Regiment of the Excelsior brigade, was recruited at Pittsburgh, New York City, Cambridgeport, MA, Tidioute, PA, and Long Island, and mustered in at Camp Scott, Long Island, between June 30-October 6, 1861, for 3-years service. Attached to Sickles' Excelsior brigade, the 74th left for Washington in August and was stationed along the Lower Potomac in Maryland during the first winter. It embarked in April, 1862, for the Peninsula with the brigade, as part of the 2nd division, 3d corps, and shared in the siege operations before Yorktown. The 74th won high praises for playing a prominent part in the battle of Williamsburg, and in the ensuing engagements of Fair Oaks and the Seven Days' battles.

Upon its withdrawal from the Peninsula in August, the regiment was sent to the support of General Pope at Manassas, after which it retired to the defenses of Washington. In December of 1862, the 74th participated in the battle of Fredericksburg, and later was engaged at Chancellorsville in May, 1863. The following month, the regiment marched to Gettysburg, where it experienced the hard fighting of the second day on the Emmitsburg road, with a loss of 89 killed, wounded and missing. As the 74th marched southward, it saw action at Wapping heights and Kelly's Ford, as well as Locust Grove during the Mine Run campaign.

In April, 1864, the Excelsior brigade became the 2nd brigade, 4th division, 2nd corps and in May the 4th brigade, 3d division, 2nd corps. The 74th fought through the Wilderness campaign and was mustered out before Petersburg, from June 19 to Aug. 3, 1864. The regiment lost 124 as a result of wounds, and 70 from other causes. It was noted for its courage and steadiness and is numbered among the "three hundred fighting regiments."

Toning to each carte, but fine condition overall. Light wear to perimeter of each mount.