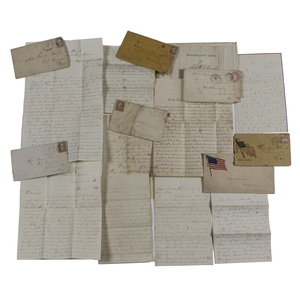 Approximately 1 in 4 soldiers who fought in the Civil War died on the battlefield. The Coulstons and Fobes were two of the thousands of unfortunate families whose loved ones never returned home. James Coulston of the 51st PA Inf. Co. A, wrote to his friend Harry from basic training, The whole brigade was out and on drill Friday and we were all drawn up in a line of battle and we shot blank cartridges we made first rate shooting and last night we had a nice little snow (Camp Union January 4). Couston enlisted on September 12, 1861 as a private and mustered into the 51st PA Inf. Co. A. The blanks became real bullets at the Second Battle of Bull Run. Coulston lived to fight again at Antietam, but unfortunately died there along with 125 other men in his regiment. Not all soldiers died from bullets or mortar shells. Over two thirds of soldiers died from disease like Ferdinand F. Fobes.

Fobes enlisted as a private at age twenty on August 11, 1862. Ten days later, he mustered into the 105th OH Inf. Co. I.  He wrote his mother thanking her for a care package she sent. After telling her the fate of each morsel he informed her about what was happening on the front,

Our cavalry men came a long with thirteen prisoners they caught about 30 miles back I expected fight this morning we was ordered out in the entrenchment this morning at 3 o’clock The news is now that Bragg is retreating and we are going after him tomorrow I expected a hard fight before this time by the preparations that has been made the sick have been moved over to the other side of the river and everything in readiness to move…if he should drop on the battle he would be prepared for the next life (Camp near Sommerville, September 23, 1862).

Illness reached across the waters and snatched Fobes. In the same letter to his mother he wrote, no one noes my feelings I cannot express my feelings on this paper but you can judge for yourself that I am endeavoring to live a better life here after. I desire the prayers from the friends at home that I may life a more hapy life (Camp near Sommerville, September 23, 1862).  He died of disease the next year on September 3, 1863 at Murfreesboro, robbing him of a happier life he might have enjoyed in peace. Pvt. William Knoop, 42nd OH Inf. Co. I, managed to avoid illness for a time, but witnessed many sick Union soldiers including Confederate prisoners.

Knoop wrote to his friends,

I took one of our boys today to the hospital that was taking the measles their was one died yesterday morning in Co. B he was the first in our regiment that died he had the measles and would not take care of himself, and took cold, we have a fine doctor in the regiment…I was talking this morning with a Virginia cesesh sick in the hospital he is an intelegent young man and took cold on the measles and has been sick in the hospital for several weeks he said he never been treated better in his life and could not be better cared for if he was at home… (Camp Chase, November 7, 1861).

Knoop enlisted in the army on September 12, 1861 and mustered in as a private in the 42nd OH Inf. Co. I. His captain was a preacher, but Knoop did not hold a high opinion of him. He wrote to his friends, If it were not that we pity him he would not be elected. Even though his company had a pious leader, it did not stop soldiers from indulging their vices.  He explained, Our religious boys have quit holding prayer meeting and some of them have went to swaring Dancing and card playing. I have not touched a card since I have been in the army, neither have I seen John play. He describes other news at camp including the arrival of 32 Rebel prisoners waiting for a new jail to be finished nearby. In a second letter on the same date, he writes to his twelve-year-old daughter while sitting beside Henry Clay’s grave. It is a simple sod covered grave not a stone to mark it except the small monument he had erected for his mother who sleeps by his side, he wrote, but just behind me stands a monument that will tell the loyal people of KY think of him. He describes to her in great in detail about the monument, the friendly people in Kentucky, their treatment of soldiers, and their better treatment of African Americans compared to Ohioans. Knoop was discharged from the army for a disability on August 27, 1862 in Lexington.

The lot consists of several other letters and documents from soldiers serving in other Midwestern regiments including:

The 18th KY Inf. saw action at the battle of Mission Ridge and Chickamauga. It was the only KY regiment to participate in Sherman’s March to the Sea.

Research concludes that Pvt. William H. Sterrett was either a part of the 16th OH or the 107th IL Inf. In his letter, Sterrett tells his cousin he enlisted into the army on August 9th and left for camp a week later. I belong to Captain Wades Company of Springfield destined for the 16th Reg., writes Sterrett. There are no records of William H. Sterrett in the 16th OH, but there are records of one in the 107th IL. If Sterrett belonged to the 107th IL, he fought in the Battle of Kennesaw and Nashville during his service.

George and his regiment are guarding the town and he is quite happy to stay there the rest of his term, talks of a troop transport that became stuck on a sand bar and after 3 days the soldiers got restless and can into town and about 200 soldiers stopped here last night...the first thing they done after getting here was to walk into a wholesale store and smash the head out of a whiskey barrel and help themselves, the owner took it very cooly (sic), said they needed it and were welcome to it. It was all the same to them whether he liked it or lumped it.... These same soldiers would walk up to farmers' wagons loaded with tobacco and just take what they wanted. Later in this 3-page letter he describes the local African American population Blank are as plenty here as fiddlers are supposed to be in a certain place mentioned in scriptures. They have dances now and them and it would tickle you to see them perform they are excruciatingly polite, they do up the dancing in good shape..., ends with a reminder to send stamps.

Typical folds and toning of the paper, most letters have their original envelopes