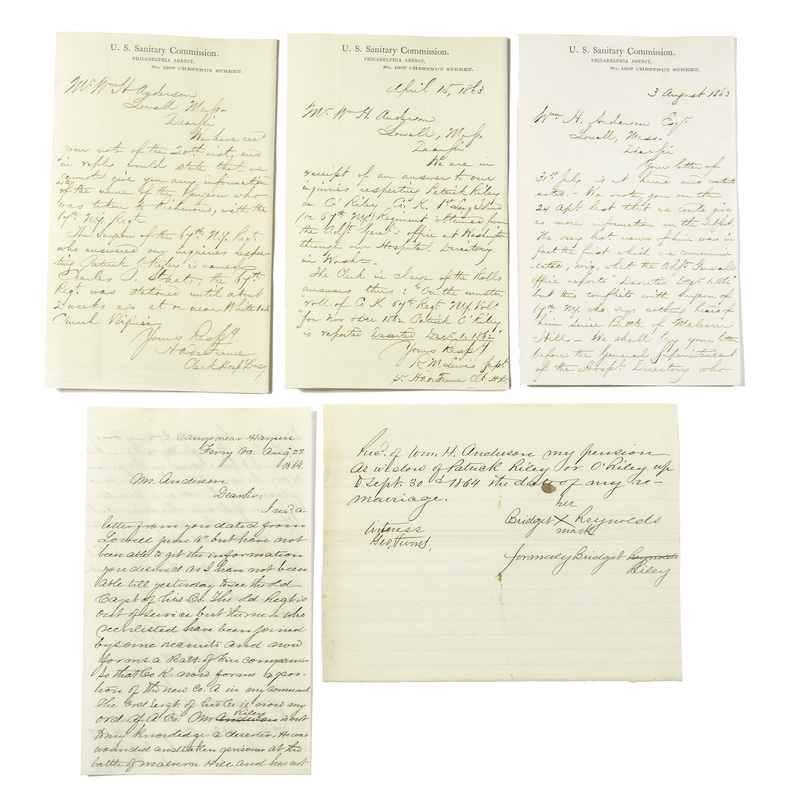 Documenting the dead was a monumental task for the Union Army. Understandably, there were some errors in paperwork as to the status of soldiers. Sometimes superior officers erroneously listed soldiers as deserters when, in reality, they died on the battlefield or had been captured by the enemy. As if the loss of their husbands were not enough, some widows of soldiers would have no access to their husbands' pensions if offices or officers listed their husbands as deserters. The only way a bereaved woman could collect their deserved benefits is if they could prove their husband’s innocence by hiring an attorney. Bridget (Reynolds) O’Riley was one of many unfortunate women whose husbands were erroneously listed as deserters. She hired William Anderson to prove her husband served valiantly and died a soldier, not in disgrace. The case took nearly two years to complete.

O’Riley’s military record is elusive as to the circumstances surrounding his death. There are few records on the Civil War database of members of his company and no listing of an O’Riley or Riley. According to the letters, O’Riley’s officers knew him as Riley. He was a member of the 67th NY Vols., Co. K and was wounded in battle.

Anderson, Mrs. O’Riley’s attorney, began searching for the truth by writing several letters to the U.S. Sanitary Commission’s clerk of the hospital, Hade France(?). Undeterred, he wrote a fourth time inquiring of the information he needed to prove Riley’s innocence. France replied,

We wrote on the 24th of April that we could give you no more information on the subject. The very last news of him was in fact the first which we communicated, viz., what the Adjt. General’s office reports “deserted Dec. 1 1862” but this conflicts with what Surgeon of 67th NY who says nothing heard of him since the Battle of Malvern Hills…as the case looks at present we fear it will be but a fruitless effort to trace him any further than that indefinite word ”Missing-“ (U.S. Sanitary Commission, Philadelphia,  August 3, 1863).

Mr. Riley is not to my knowledge a deserter. He was wounded and taken prisoner at the Battle of Malvern Hill and has not been heard of by anyone of the Regt. It Is pretty certain that he must have died in the prison or on the road to Richmond. He was placed on roll as a deserter by error of the one who made out those rolls at the time you mention. December 1, 1862….(Camp Near Harper’s Ferry, August 23, 1864).

Anderson’s inquiry was enough to restore Mrs. O'Riley's pension. He had her sign a receipt on September 30, 1864 verifying her acceptance of it.