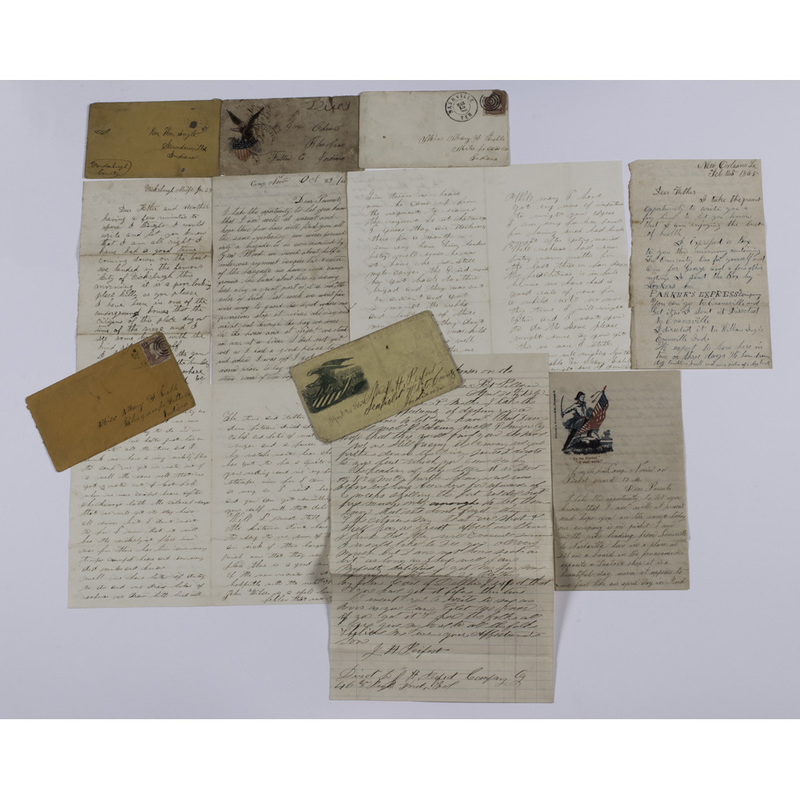 Joshua H. Perfect was barely a man when he signed his name at the recruiting office. Three months after he turned eighteen, he enlisted as a private in the 46th IN Inf. Co. G on November 5, 1861. From the capture at Fort Pillow he wrote to his parents,

we are still facing the enemy we gone further down the river since I wrote to you last….about 100 miles further than we was before we have been here for upwards of 2 weeks shelling the fort we do not fire much only enough to let them know that we don’t forget them The citizens say that our shot shell has great affect on them I think that they will evacuate soon…I am not home sick a bit as long as I keep well I am perfectly satisfied (Camp in Arkansas on the Mississippi River, Near Fort Pillow, April 30, 1862).

In November 1863, Perfect was discharged from the army. He liked military life enough to reenlist on March 13, 1864. He mustered into the 11th IN Co. K, but his second time serving proved fatal. He died of disease in St. Louis, MO, three days after his twenty first birthday.

Private Robert W. Christie enlisted on September 26, 1861 and mustered into the 29th IN Inf. Before leaving basic training at Camp Nevin, he wrote to his parents,

yesterday we were formed into a bregade to be commanded by Gen. Wood we moved about half a mile our regiment occupies the center of the bregade we have a good camp ground….it rained all day and night but through the day we were in the house and at night we stood an hour at a time I did not get as wet as I had a good place to stand and when I was off I got a good warm place to lay down beside a stove….The day before we were on picket guard I was helping break mules we had four to a wagon and four men a man to a mule all of which rode if you can call going side ways and backwayrds and then running through the woods with us on their backs riding then we rode but to make short work of it I would rather try to work an ox than a mule to pull on their bits is like pulling a dead cow by the tail for you cannot move them I think it it’s the last mules that I will bother (Camp Nevin. Oct. 22, 1861).

While on pike duty a mile from Camp Nevin he wrote to his parents again,

We have plenty of cover and blankets and straw to lay on health of the camp is good by taking in consideration the number that is in camp 50,000 men is a good many to be within sight of Gen. Sherman is here. I do not know what his business is but I think we will not stay long some of the officers say we will leave this week but they do not know any more than I do…the man that was shot belonged to the 30th Reg and was on picket when he was ordered to another place he had to cross the beat of another the night was dark and he did not see the guard not him speak when the guard shot he lived about half an hour the one that shot him was a personal friend belong to the same company last night some of our boys shot at men in the woods but missed. Our regiment leaves tomorrow with the rest of the camp for Green river the rebel camp do not expect to have to fight but many of our scouts say there is near 30,000 at the camp between there and Bowling Green…the Gen says he wants to winter at Nashville (Camp Nevin, Oct 30, 1861).

Christie left the safe, warm spot beside the stove at Camp Nevin for hell at Shiloh. One can imagine the tears either he or some men in his regiment shed out of terror while enduring over five hours of heavy fire. He managed escape death at Shiloh, but died at Nashville on March 5, 1862. His regiment continued fighting without him, struggling to survive some of the bloodiest incursions of the war including: the siege of Corinth, Stone’s River, and Chickamauga; where over half of the 29th IN died. One of the men still fighting after Christie’s death was private John Harvey Grable.

Grable, known as John or Harvey, enlisted on October 13, 1861 and mustered into the same regiment and the same company as Christie. One wonders if the two soldiers knew each other or even shared a meal together. Grable wrote his sister two letters from Tennessee. In one letter, he was concerned over the conditions at camp.

I think we have a very sickly place to camp we git out water out of a well the same well that we got water out of last fall when we were camped heare after Chickamauga battle the colonel says that we will git to stay here all sumer but I don’t want to for I now that it will be the sickelyist place ever was for there has bin sow meny trups camped heare and sow meny dead mules and horses (Camp at Chattanooga Tennessee, April 9, 1864).

Gable was right to fear the condition of the drinking water, because dysentery was responsible for the deaths of over 45,000 Union men and 50,000 Confederates. The unsanitary conditions, stagnant water, and dead animals spread the disease; however, doctors did not discover the causes of dysentery until eleven years later.  Dysentery was mostly likely Grable’s cause of death at Chattanooga on July 1, 1864.

Contrary to his fellow Indiana men, John K. Ingle did not die from disease, he drowned at Mobile Bay, AL. He mustered into the 1st IN Heavy Art. Co. K at age twenty on February 4, 1864. A few months before his tragic death, he wrote to his parents.

I have had a good time coming down on the boat we landed in the famous city of Vicksburgh this morning...I have been in one of the underground houses that the citizens of this place dug out time of the siege and I see some houses with the hind sides shot off I have seen where the gun boats have burnt the burley from off the plantations and where towns have been burned…I have seen a good many negro soldiers they look sweet (Vicksburg, MS, Jan 28, 1865).

The day before his death, his superior officer Capt. William S. Hinkle, wrote in a report that the regiment became engaged with the enemy along the river and successfully drove them away, killing and wounding a large number of Rebels including CSA Gen. Green. The 1st IN lost only one officer and three privates. Gable joined the short list of casualties the next day.

Typical folds and toning of the paper.