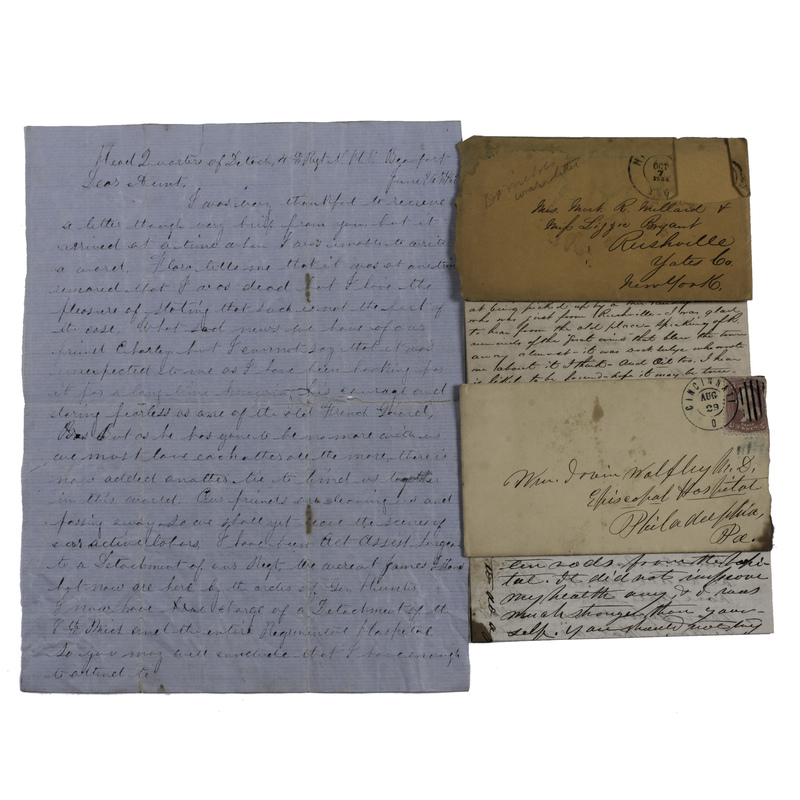 Death permeated the air surrounding the makeshift hospital tents along with the stench of unsanitary conditions. Beads of sweat accumulated on the brows of overworked surgeons attempting to concentrate while drowning out the screams of their patients and the groans of the wounded. The almost constant stream of soldiers either wounded in battle or suffering from disease left Civil War surgeons little time to answer their loved ones’ letters. I have been Acting Assist. Surgeon to a detachment of our regt. [4th NH Inf.], wrote Dr. David P. Dearborn, I now have charge of a detachment of the 8th Mich, and the entire Regimental Hospital so you may well conclude that I have enough to attend to (Headquarters of Detach, 4th Regt. N.H.V., Beaufort, SC, June 26, 1862). It had been so long since Dearborn’s family had heard from him they presumed he was dead. He sent them a letter informing them that he was alive, but desperately busy.

As a twenty-five-year-old medical student Dearborn enlisted in the army on September 18, 1861. He mustered in as a private in the 4th NH Inf. and received a promotion to 2nd Lieut. on March 22, 1862. Either from need of more medical personnel or a calling to work in the hospital, he resigned on November 4, 1862 but returned the next month as a member of the field and staff as a 2nd assistant surgeon for his regiment. He rose to the rank of surgeon by November 9, 1864.

Despite Dearborn’s willingness to serve as a private before becoming a surgeon, not all physicians in the United States were as eager to enlist. Dr. J.F. Potter of Cincinnati wrote his friend Dr. William Irwin Wolfley, There are plenty of medical men, I do not want to serve as a private…(Cincinnati, OH Aug 27, 1861).  Fifty-three-year-old Potter, lamented at Lincoln’s choice in Simon Cameron for the war department. Mr. Lincoln has done as bad [as] he could do, wrote Potter. He attributed Cameron’s cabinet position as a reason why so few Ohioans did not enlist. Even though Lincoln forced Cameron out in 1862, Potter never joined the front. Dr. Henry W. Nichols, on the other hand, enlisted almost immediately.

Nichols joined the army on June 1, 1861 at St. Louis and mustered in as a surgeon for the 8th MO Inf. He later became an acting staff surgeon under General Sherman on the 4th MO Cavl. during the battle of Atlanta. He wrote to Mrs. Millard and Ms. Lizzie Bryant,

Your letter of July found me with my sleeves rolled up and---but I need no tell you what I was doing for I dislike to offend delicate ears…Near Atlanta there had been strife and contention between excited and angry men and a great great many poor fellows had got badly hurt and it was my part to do what I might to alleviate their suffering—poor boys! (In Camp East Point, Ga, Sept. 27 1864).

He mustered out of service on August 16, 1864 but had a roving commission and was not attached to any particular regt. (In Camp East Point, Ga, Sept. 27 1864). He planned to continue to serve until the spring although there is no other record of his service. While serving in the 8th MO, Nichols experienced the carnage at Shiloh and Vicksburg. He most likely buried many men. Well acquainted with death but still mournful of its coming he wrote,

Oh! The sad expression of [a soldiers] dying face as the truth [that he is dying] forced itself upon him—I have seen many such sights this summer—God forgive me, but I can’t help calling for the cause upon those who formulated this war…Men who are severely perhaps fatally wounded seldom complain—whether it is high courage, despair, or unconsciousness of their condition, I have never been able to ascertain but the fact stands under the most formidable wounds I have seen them entirely cheerful  (In Camp East Point, Ga, Sept. 27 1864).

Whether soldiers went cheerfully or fearfully into the grave, surgeons did all they could to cure the wounded. More often than not; however, physicians’ methods sent soldiers into the grave, not their war wounds.

Toning of the paper and typical folds, many have the original envelopes.