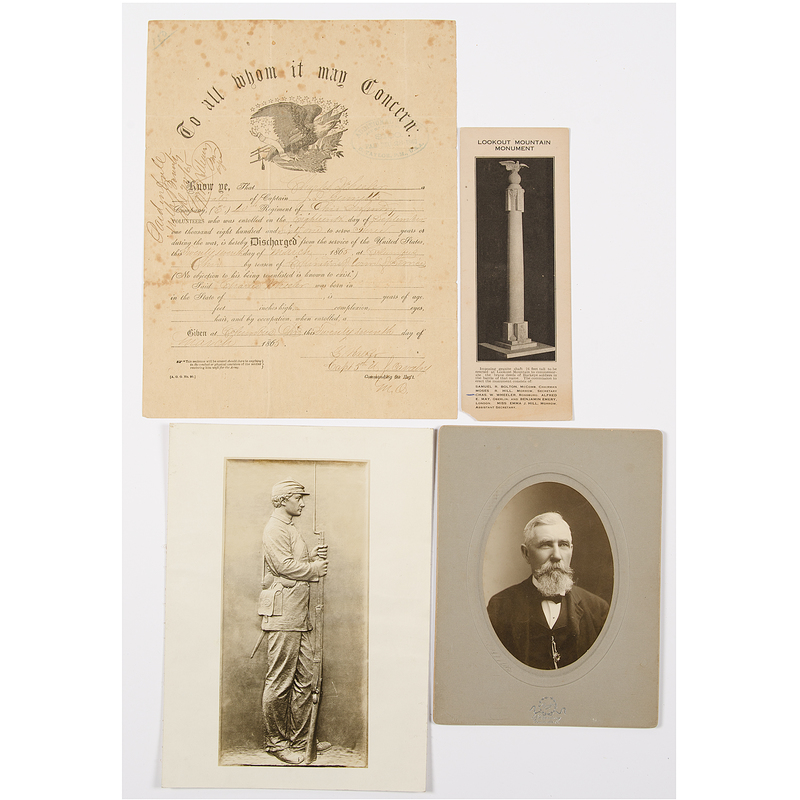 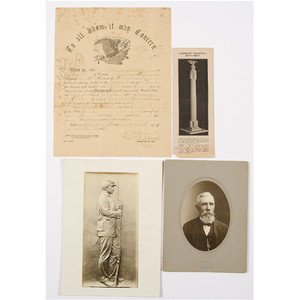 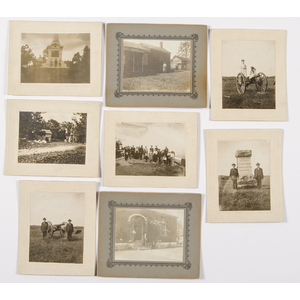 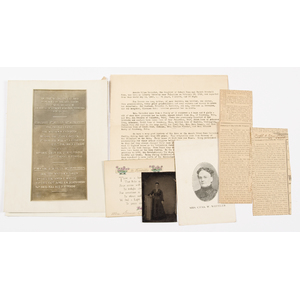 Flier, 4 x 6.75 in. “Independence Ball at the Shelburne Hotel” Friday, July 3, 1863 (the last day of fighting at Gettysburg, but they could not have known that when the ball was planned). Committee of Invitation included men from Burlington, Charlotte, Ferrisburgh, Hinesburgh, Williston, and (of course) Shelburne, Vermont

Photo, 3 x 4 in. on 4.5 x 5.5 in card, of two old GAR vets in front of monument to 18th Battery Ohio Light Artillery at Chickamauga National park, one is likely Wheeler

Two more photos, same size, one of man, woman, young girl on base of another monument, too dark to read, and second of outbuilding with buggy and derrick (windmill? Oil?)

Another photo, same as the four previous, of the entire family standing probably on Lookout Mountain, two cannons on caissons behind them. Similar photo of two young girls climbing on a cannon (appears to be the same one the two veterans were standing in front of)

3 x 4 in photo on 5 x 6 in card of farmhouse and some outbuildings (Wheeler’s??). Second similarly mounted card of older woman on steps of a public building (church?), with a young man and adult man closer to the entrance.

Two photos of monument plaques, both approx. 7 x 9.5 in. and linen backed, with stamp on verso of  the Bunnell Company, Cleveland, Ohio.  Both “Erected by the State of Ohio / in Memory of the Ohio Troops / That were Engaged in  / The Battle of Lookout Mountain, Tennessee / Nov. 24, 1863” One for the 1st Brigade, 2nd Division, 12th Army Corps; the other for the 2nd Brigade, 1st Division, 4th Army Corps.

Group of obituaries and photographs. Two copies of a newspaper obit for Charlotte M. (Mrs. Charles) Wheeler plus a half-tone photo of Mrs. Wheeler. In addition there is a 6th plate tintype of an adult woman who could be a younger Mrs. Wheeler. However, there is an offset obituary for Amanda Ellen (Ross) Hercules, and lists among her siblings who pre-deceased her Mrs. Charles Wheeler. So photo could be Mrs. Hercules, Mrs. Wheeler’s sister. The Hercules obituary notes that the Ross family were second cousins to the William McKinley family, having intermarried when both families were living around Canton, OH. Plus a sympathy card.

Reprint of a letter to the National Tribune, Washington, DC, 9 July 1903, about the position of monuments at Andersonville. Letter from Capt. James P. Averill, Chairman Advisory Board Andersonville Prison Park. Plus photocopy of escutcheon of Charles W. Wheeler.

Clipping from publication of proposed monument to commemorate Ohio soldiers at Lookout Mountain, Chas. W. Wheeler listed as one of the commission members.

Newspaper obituary for J.P. Dearworth, of the 40th OVI, written by C.W. Wheeler, several other obits, though not attributed to Wheeler, plus a newspaper description of Darke County Battalion at the GAR encampment in Chicago – most likely the 1900 34th National Encampment (although the 9th was also held at Chicago in 1875

5 x 8 in. sheet, with printed notice of sale of land from an estate on one side and manuscript pledge on the other to band together to bid on a road improvement job, signed by Charles Wheeler, two Rosses (brothers in law), Jacob Hercules, and several others (9 total – most likely all neighbors and kin)

Group of miscellaneous papers, including a blueprint plat of Rossburg, brochure for Hoffman Valves, flier for San-Equip Septic Tanks, US Government reprint “Problems in the Poultry Industry” (22 Aug. 1958), direction for setting up and operating Buffalo Regulator, paid mortgage for sale of land from C.W. Wheeler to Sarah Morison, tax certificate for C.W. Wheeler, Greenville Cemetery receipt dated 2 May 1911? For R.S. Wheeler, card from the local Representative in Congress to Stanley Wheeler which  accompanied the Poultry Industry paper (both with similar paperclip marks), 3 x 4.5 in. photo of coop and dozens of chickens

Charles William Wheeler (1844-1924) was a lifelong resident of Darke Co., Ohio.  In September 1861 he enlisted in Co. E of the 40th Ohio Volunteer Infantry. The database gives his age as 18 at enlistment, but he seems to have stretched the truth a bit since he was born in 1844 (he would not have been 18 until March 1862). After his 3-year term of service, he apparently veteranized, and in  December the remains of the 40th were merged into the 51st OVI. His government discharge form indicates that he was a Prisoner of War, but not where he was held. He was captured in June 1864 at Kennesaw Mountain, GA. After surviving the war, he married Charlotte M. Ross in 1867 and farmed in Darke County.