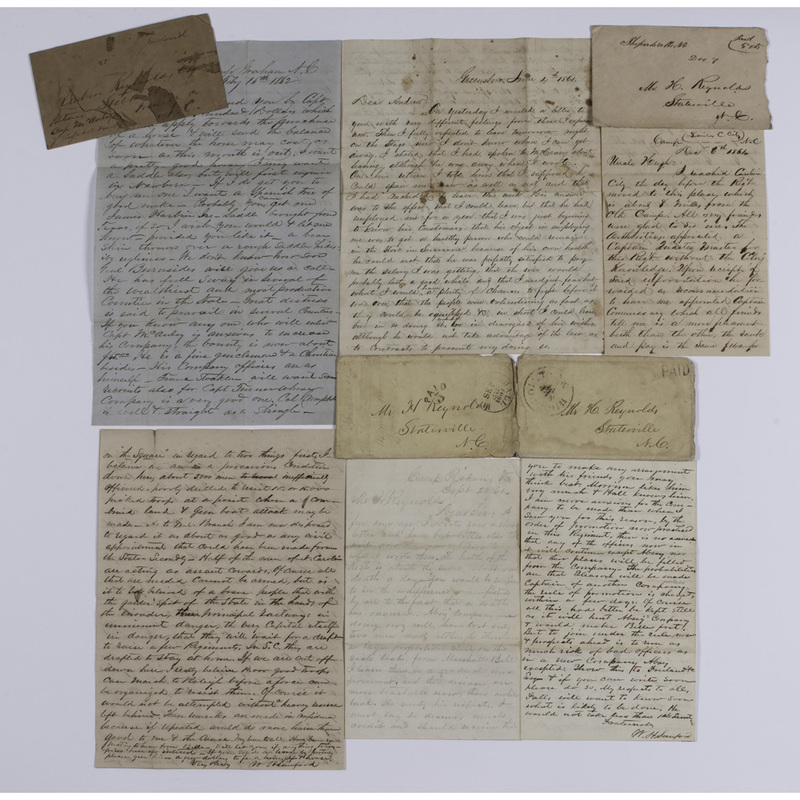 Captain William H. Sanford might have fought on the other side of the picket line, but his thoughts, feelings, and war experience were comparable to his Union counterparts. Like many young men, he was eager to enlist but cooler heads assured him he would have a chance to fight. Similar to some Union officers, as an officer, Sanford had the ability to employ a “boy” to care for his meals and laundry.  Sanford wrote to his uncle, Hugh Reynolds, in North Carolina,

If I get the appointment I shall need a boy and if possible one who can cook. His labor will be very light as the mess is small…the mess has 2 boys but they are not of the best kind. If I could get a good boy I would be willing to pay a fair price, I would prefer a slave…I thought probably you might be able to hear of one that would suit. As soon as I hear from the department I will write about the bond and negro both (Camp 8 miles C. City, NC, December 6, 1861).

Sanford lived in Iredell County, NC before enlisting in the Confederate Army. According to census records, his father, Amos was a trader and farmer from Connecticut who moved to South Carolina and, in 1850, lived with Hugh Reynolds along with several other extended family members. Reynolds was a prominent businessman in the area. He had a long list of titles and occupations including: farmer, factory owner, county commissioner, and slave owner. He owned many slaves which could imply that Sanford’s father exchanged human property instead of or in addition to material goods. Claiming to be too old to enlist, Reynolds was no doubt proud of Sanford and his brother Calvin when they chose to represent the family and fight for the Confederacy.  Sanford was not directly related to Hugh Reynolds. Hugh’s brother, Rueben, married Sanford’s sister Laura. Although they were not blood related, Sanford referred to Reynolds as either uncle or sir in his letters and Reynolds used his influence to obtain a commission for his “nephew.”

Sanford worked as an apprentice in Davie, SC in 1850 and in a shop in Greensboro, NC when the war broke out. He desperately wanted to leave the store to join the effort. When Sanford approached Mr. McCrary about quitting McCrary explained that he employed Sanford for the summer because his health would not permit him to run it alone. He assured Sanford that, the war would probably last a good while and that he would have plenty of chances to fight before it was over (Greensboro, June 4, 1861). Sanford agonized between the questions of honor; protect his state or keep his word? He wrote to his friend Andrew,

I hate to violate the spirit of a contract…I really will need all I can make this year if I go into the service although I can do without it... After a devastating war, if disabled I will be at the mercy of the public that is one side of the picture; the other is our army of invasion, my duty to assist in repelling it, my friends in camp, my hearty approval of the action of N.C. pride of character &c &c. You can readily appreciate what my inclination would lead me to do, what ought I do? (Greensboro, June 4, 1861).

Sanford chose to remain at the store until September.  Then, he went to the front and helped in various positions including a hospital caring for sick Confederate soldiers (Camp Pickens, VA, September 6, 1861 and Manassas, VA, September 21 and 22, 1861). He waited for a commission to become available with the new regiment his uncle helped form or another. In December, he traveled to the front to sign the dotted line and accept a position on the field and staff of the 7th NC Inf. He wrote his uncle,

I reached Carolina City the day before the Regt moved to this place which is about 8 miles from the old camp. All of my friends were glad to see me. The authorities appointed a Captain Quarter Master for this Regt. without the Cols knowledge. Upon receipt of said information he forwarded a recommendation to have me appointed Captain Commisionary which all friends tell me is a more pleasant berth than the other (Camp 8 miles C. City, NC, December 6, 1861).

His appointment meant Sanford needed a horse. He enlisted the help of his brother-in-law, Rueben to purchase him a good one in addition to a saddle (Camp Graham, NC, February 16, 1862). In a second letter concerning the horse and saddle, Sanford wrote to Hugh Reynolds, I will probably be among a body of men about Newbern who have good and even fine war horse…I would not like to have a horse that was not fully of average looks (Camp Graham, NC, February 22, 1862). He continued writing about his specifications for the horse and saddle to ensure that he had the proper equipment with a few quality details.

Pleased with his appointment, he urged others to join as well.  We don’t know how soon General Burnside will give us a call, he wrote to Rueben. He has full sway in several of the wealthiest and most productive counties in the State—Great distress is said to prevail in several counties If you know anyone who will enlist Capt. McAuley is anxious to inclose his company, the bounty is now 65.00 (Camp Graham, NC, February 16, 1862). He also spoke to his uncle about his concerns,

I believe we are in a precarious condition down here, about 5000 men ineffectually officered, poorly drilled to resist 10 or 15000 picked troops at a point when a combined land and given boat attack may be made—As to Genl Branch I am now disposed to regard it as about as good as any civil appointment that could have been made from the state…Half of the men of N. Carolina are acting as  arrant cowards of course all that are needed cannot be armed, but is it to be believed of a brave people that with the garden spot of the state in the hand of the invader, the principal railways is in imminent danger, the very capital itself in danger, that they will wait for a draft to raise a few regiments in S.C. they are drafted to stay at home. If we are cut off down here I really believe that 10,000 good troops can march to Raleigh before a force can be organized to resist them…. These remarks are made in confidence because if repeated it will do more harm than good to me and the cause (Camp Graham, NC, February 22, 1862).

New Berne would be Sanford’s first and last destination for war. He was wounded on March 14, 1862 and returned to Reynold’s home. He suffered for three agonizing months until he died of his wounds on June 15, 1862. Three days before his death, Sanford prepared his will, leaving all his stationary and books to his niece, Margaret (Maggie); his sword and belt to Calvin Benham, a private in the 1st NC Cavalry.; his silver watch to his brother Calvin C. Sanford, a 3rd lieutenant in the 42nd NC Inf.; and all his cash and property to his brother-in-law Rueben.