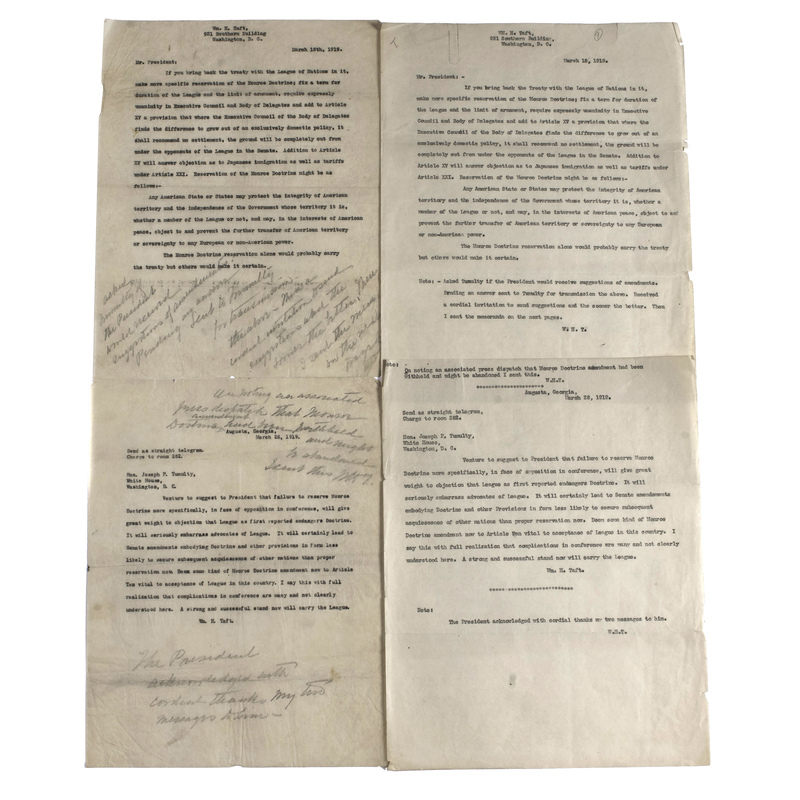 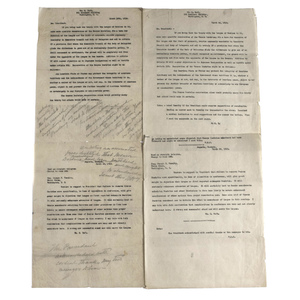 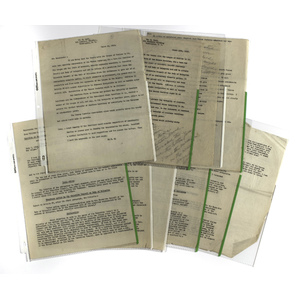 Documents Related to League of Nations with W.H. Taft ANsS

The earliest is one page from William Howard Taft to the President (Woodrow Wilson). Taft makes recommendations about getting the treaty (of Versailles) passed through the Senate if it contains the League of Nations. In this first communication Taft makes brief references to the changes he has in mind, and ends with: "The Monroe Doctrine reservation alone would probably carry the treaty but others would make it certain." Below is a manuscript note in Taft's hand: "Asked Tumulty [Joseph Tumulty (1879-1954), Wilson's personal secretary] if the President would receive suggestions of amendments. Pending an answer sent to Tumulty for transmission the above. Received a cordial invitation to send suggestions and the sooner the better. Then I sent the memoranda on the next pages. W.H.T." Second page is a "clean" copy of the letter with typed transcriptions of Taft's note.

The second group consists of two copies three pages each of Taft's recommendations for amendments to each section and the Explanation for why the amendment is recommended. His suggestion for Article X (a): "state or states of America, a member or members of the League, and competent to fulfill this obligation in respect to American territory or independence, may, in event of the aggression actual or threatened, expressly assume the obligation and relieve the European or non-American members of the League from it until they shall be advised by such American state or states of the need for their aid." ...(Explanation) "Objection has been made that under Article X, European governments would come to America with force and be concerned in matters which heretofore in the United States has excluded them...This fear could be removed, however, by the first of the above paragraphs." Again, the second copy is "cleaner" than the first, but appears to have Taft's hand-written date on the first page.

The third document has at head: "send as straight telegram," and is addressed to Tumulty. "Venture to suggest to President that failure to reserve Monroe Doctrine more specifically, in face of opposition in conference, will give great weight to objection that League as first reported endangers doctrine... a strong and successful stand now will carry the league." Taft's manuscript note at top: "On noting an associated press dispatch that Monroe Doctrine amendment had been withheld and might be abandoned I sent this. W.H.T." A second note at the bottom of the page: "The President acknowledged with cordial thanks my two messages to him. W.H.T."

At the beginning of "The Great War," a group of British (then international) pacifists formed a group, later known as the Bryce Group, to draft  an organization to prevent future wars. The Bryce Group later came to be known as the League of Nations Union, giving its name eventually to the first attempt at a "United Nations."

The following year, a similar body formed in the United states. The group included William Howard Taft, and they called themselves the League to Enforce Peace, advocating arbitration to avert armed conflict.

At the close of shooting in WWI (peace would yet be a couple months away), committees of the allied nations brought their proposals for an international body, which were incorporated into the Covenant of the League of Nations. As the US Senate debated the Treaty of Versailles and the Covenant, objections arose, mostly focused on the fear of loss of autonomy and the risk that other member nations would invade our shores under the guise of "aid."

Although the League of Nations ended up being mostly ineffectual, and the US never did ratify the Covenant to join the League, lessons were learned from this early attempt at international organization. The League of Nations formed the foundation of the United Nations, a more effective body that has survived nearly three-quarters of a century now. Part of the success may be attributed to the wider-ranging concerns of the UN - international health care (it did wipe out smallpox), food programs, etc. Its peace-keeping forces have certainly protected civilians and occasionally been a calming force in conflict zones.

Some wrinkling and edge scuffing, as expected. Overall very good.