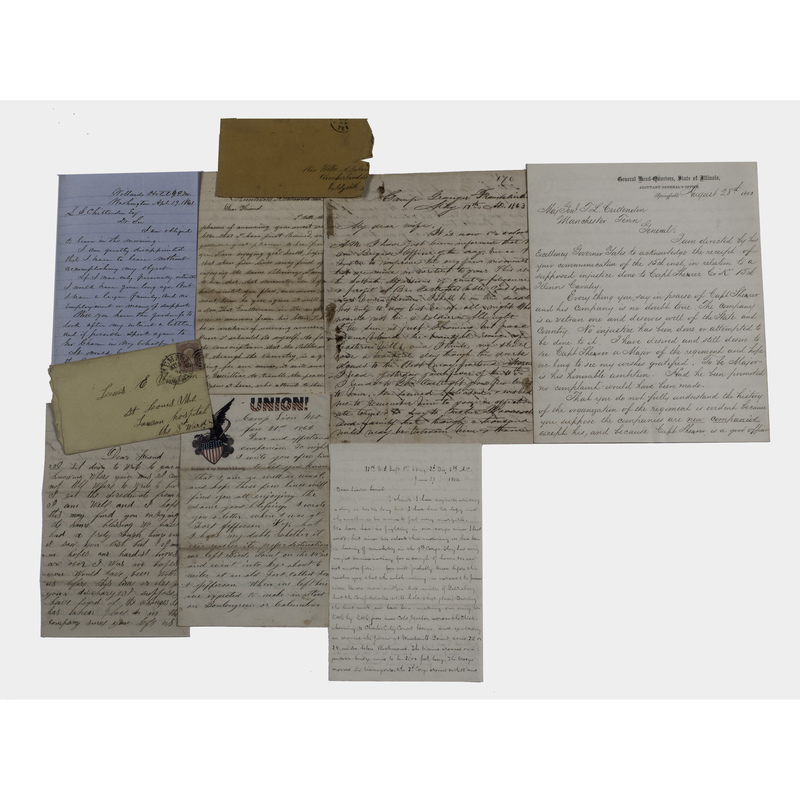 Adjutant General Allen C. Fuller writes to General T.L.  Crittenden concerning a perceived slight Crittenden believed was committed against Capt. Samuel B. Sherer (erroneously spelled Shearer) of the 15th IL Co. K. Everything you say in praise of Capt. Shearer and his company is no doubt true, writes Fuller. To be a Major is his honorable ambition. Had he been promoted no complaint would have been made (Springfield, IL, August 28, 1863). Fuller explains the organization of the regiment and the dates of several Captains’ promotions to Major. He closes his letter by saying, I trust an examination of these papers will satisfy you, General, that Capt. Shearer has been treated fairly and that the deserved fame of his company has not been tarnished by the organization of the 15th Illinois Cavalry (Springfield, IL, August 28, 1863).

According to Sherer’s service record he received a promotion to major on July 29, 1863, a month before the letter. It is possible superior officers revoked his promotion, which prompted Chittenden to write Fuller. Regardless, Sherer was given the commission and its initial date remained the same.

Sherer enlisted in the army as a 1st Lieut. on August 20, 1861. A month later he commissioned into “Jenks’” Co. in the IL Indpt. Cav. That winter, he transferred into the 15th IL Cav. Co. I and received a promotion to Captain in July 1862; two months after fighting at the Battle of Shiloh. The next month he transferred to Co. K.  He transferred again into Co. K’s field and staff on February 11, 1864 and mustered out of service on August 25, 1864.

Desperate for a position to support his family, fifty-two-year-old physician Samuel A. Hopkins pleaded L.E. Chittenden to speak again to Gov. Chase in [his] behalf for an appointment (Willards Hotel, Washington, D.C., April 19, 1861). Hopkins accepted a position the next year, on March 14, 1862 as the assistant surgeon for the 93rd IL Inf. He was commissioned onto its field and staff on October 13, 1862. On July 29, 1863, he received a promotion to surgeon. He resigned on December 21, 1864.

Prior to his position in the Treasury, L.E. Chittenden was a free soil politician and one of five Vermont delegates at the Washington Peace Conference. When the war began his political ally, Salmon P. Chase offered him the position of Register of the U.S. Treasury. He approached the job with vigor and often worked to the point of exhaustion. On one occasion, 12,500 bonds had to be sent to England. He tirelessly worked for three days, signing each bond with his own hand to ensure all would be received on time. The three-day ordeal injured his hand and wrist, which forced him to resign in 1864.

Woodcock enlisted as a captain on September 4, 1862 and commissioned into the 92nd IL Inf. Co. K. He was promoted to major on June 28, 1864. He and his regiment fought at the battle of Chickamauga and participated in Sherman’s March to the Sea.

Gerard enlisted as a private on August 13, 1862. He mustered into the 80th IL Inf. Co. C on August 25, 1862. He and his regiment fought at the Battle of Resaca, Kennesaw Mountain, and Atlanta. They also participated at the battle of Nashville. He wrote to his friend Ms. Ballard about the battle, we fought two days, the second day captured 50 pieces of artillery, the paper is to small to tell the actual detail (Huntsville, AL, January 11(?), 1865). He also wrote to her about the recent conscription announced by the Confederacy, [it] is a great thing, for our cause, it will make less guerrillas to trouble the peaceable citizens at home, who attends to their business (Huntsville, AL, January 19, 1865). The remainder of his letter to his sweetheart mostly pertains to war news discussed in newspapers. He mustered out of service in Nashville on June 10, 1865.

Gaston enlisted in the army as a corporal on August 20, 1861. He mustered into the 7th IL Cav. Co. G on September 13, 1861. Shortly after the company’s enlistment and his promotion to 1st Lieut., he penned a letter home.

We left Bird’s Point on the 14th and went into Ky about 6 miles at an old Fort called Fort Jefferson. When we left here we expected to make an attack on Bowlingreen or Columbus…There is some talk of now sending our regiment to Cape Giradeau but I do not know for certain…I have swapped buck off and have got a horse about the size of Mory. His name is Charley and when I have him out on parade he holds his head and tail up and looks as neat as a picture (Camp Lion, MO, January 21, 1862).

The 7th IL Cav. saw action at Corinth and Nashville. Gaston mustered out of the army on October 15, 1864.

Lewis E. Simpson lived in Magnolia, IL before enlisting in the army as a private on August 22, 1862. Less than a month later, Simpson mustered into the 77th IL Inf. Co. B and departed for the front. He writes his friend, John E. Macomber, about his experience at the battle of Vicksburg,

We had a pretty rough time since I saw you last but I am in hopes that our hardest times are over… They have had quite a little skirmish in magnolia with browning(?) and Dutch John but I am afraid they will get the worst of it before they get through with it our regiment over 3(/8)?),000 men killed wounded and taken prisoners in the charge they made on the 22nd of May I thought we lost a good many at the past but it was not any to what we lost here but I am in hopes we wont lose any more (Vicksburg, MS, July 29, 1863).

Simpson saw a little more action after the battle, but not nearly the same degree as Vicksburg. He was discharged from service on August 12, 1863, ten days’ shy of a full year of serving.

Brooks enlisted in the army on June 15, 1861. He mustered out at the end of the next month but enlisted a second time with the same company. Three years and two days after his first enlistment, he wrote to his sister, Sarah,

We are now within two miles of Petersburg but the Confederates still have that place. Durin the last week we have been making our own way here little by little from near Cold Harbor…and up today we crossed the James at Windmill Point…We expect to have some fight very soon.. I hear a cannon about twice a minute at present, it is about 10 am and firing will probably cease soon at near night (June 17, 1864).

Typical folds and toning of the paper.