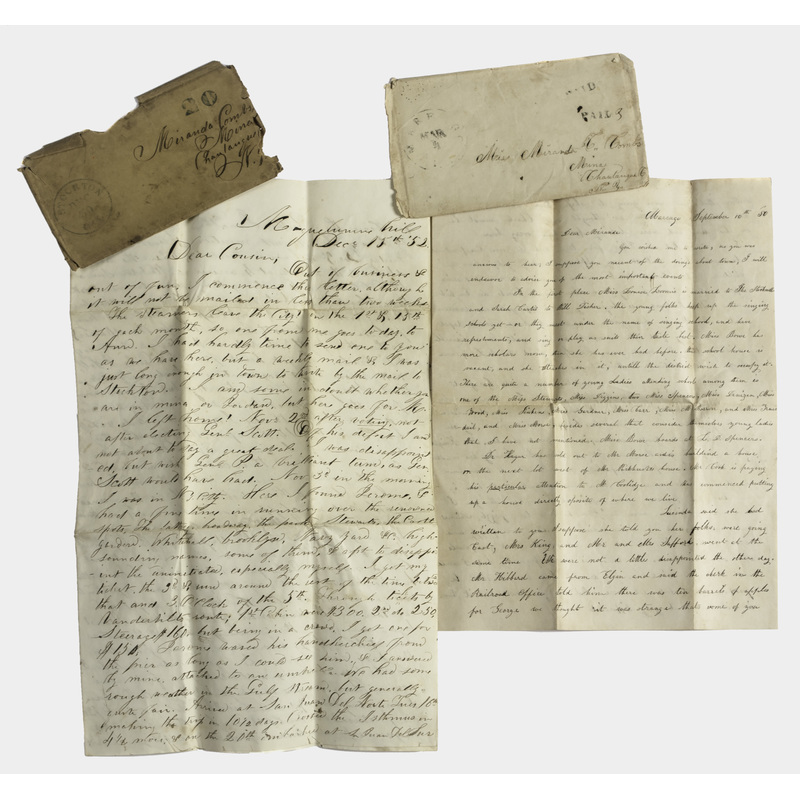 Lot of 2 letters, both to Miranda Combs of Chautauqua, NY.

One letter is from her cousin, unnamed, 4pp (8 x 12.5 in.), Moquelumne (Mokelumne) Hill, Dec. 15th & 19th, 1852. The first part, as is typical, describes his journey to San Francisco, beginning with meeting a friend in New York City, and "running over the renowned spots, the battery, broadway, the parlor, Stewarts, the Portt (?) garden, Whitehall, brooklyn, Navy Yard, &c., high-sounding names, some of them & apt to disappoint the uninitiated, especially myself." His vessel got underway on Nov. 5 heading south to San Juan del Norte, where they arrived in a little over 10 days. They then crossed the Isthmus and boarded the Brother Jonathan at San Juan del Sur. They reached San Francisco on Dec. 3rd, then boarded a river steamer to Stockton, arriving the following day. He notes that his luggage was not transported across the isthmus in time to board the next ship, so he had to purchase clothes and blankets in Stockton (luggage was lost even a century and a half ago!).

Immediately after arriving, he met up with friends/partners (?), and they began to make money - about 14 dollars each in a day and a half. He mentions that they spent a lot of time waiting for rain to wash out the gravels. In Cal., the "saw" is instead of 'make hay while the sun shines,' is 'wash while the rain falls.' He mentions a couple of snows in the hills, also.

The letter is written over several days, since the mail only went out of Stockton on the 1st and 15th of the month. When he started the letter, the mail had already gone for the 15th. Therefore the postmark is Dec. 30 - almost the beginning of the new year. Besides the gold works, the unnamed cousin mentions the others in the "boom town." "The hotels are almost entirely brothels & gaming hells; three-fourths of the women, unsightly and moral corpses. Negroes, Chinamen, Spaniards, Chilians, French, Dutch, rowdies & desperadoes from the Atlantic States & all other hot-beds  of crime. Such is Moquelumne hill, & as you reasoned, such is Cal. as far as I can judge." He goes on to mention lots of "shooting & stabbing," and a Chilian executed for horse theft. They had word that Sacramento was under six feet of water and several drowned between Stockton and Sacramento. Much of the rest is family and friends. Possibly signed "O.C." (presumably "Combs")

Mokelumne River and Hill were some of the richest gold mining towns in California. The town did have the reputation of being one of the bawdiest in the area, largely because of the "rowdy" and criminal elements. Finally, a "vigilance committee" was formed to cut the violence and crime, and by 1852, when Mr. Combs saw it, it actually was more civilized than the previous few years!

The second letter is earlier, dated from Marengo (no state), 10 Sept. 1850. The letter is about 2.5 pages from Polly Combs, another cousin of Miranda's. It is unclear which Marengo, since there are a number of them (OH, AL, IL, IN, IA, MI, NE, WI). Most of the letter is family and friends. At the end, she mentions items left by Miranda and Catherine, so apparently they had just recently been for a visit.

Typical folds of the letters and toning of the paper.