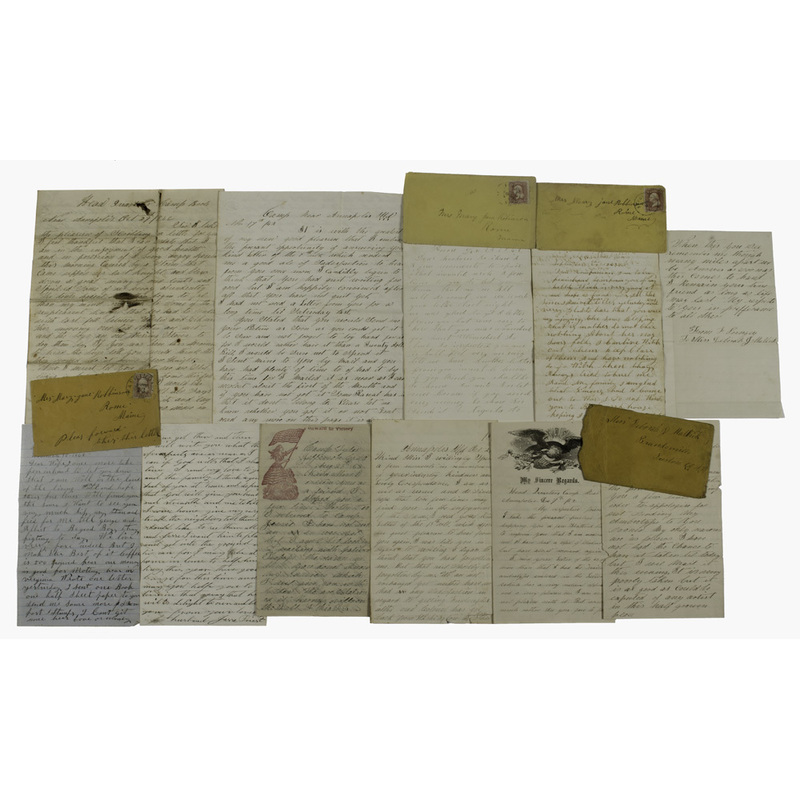 Young Lt. Frederick Pringey joined the service as a private in the 3rd MD Inf. Co. H in March 5, 1862. He accepted a commission as 1st Lieut. of the 3rd MD Inf. Co. I that September. While serving the Union he met a young Virginia woman named Miss. Deborah J. Matlick. The two formed an acquaintance that Pringey certainly hoped would blossom into much more. He sent several letters from Annapolis to Matlick asking her for her likeness, sending her an ambrotype of himself, and even a poem of “friendship.” He discusses some of the men and typical soldier news with her including a bout of typhoid fever he contracted in November 1862 that he overcame. Less than three months later, on January 3, 1863; however, he suffered from an illness he would not recover. He is currently buried at Russell Smith Farm Cemetery in West Virginia.

It appears that Deborah did marry another Civil War Veteran, Dr. J.B. Fogle, in 1878.

Thirty-six-year-old John Robinson lived with his wife of fourteen years and his children in Rome, ME. They were desperately poor. Mary worked long, hard hours as a housekeeper in town while John worked their farm. Most likely out of desperation for money or the draft, Robinson enlisted in the army on August 14, 1862 and mustered into the 16th ME Inf. Co. E. It pained him to know that his wife had to work so hard scrubbing the floors and kitchens of others, but the family was reliant on her income (Camp Near Sharpsburg, September 28, 1862). The long stints without pay from the military did not help the family either. Consequently, Robinson could not afford some of the essentials. I have not had a cleen shirt in a leven weeks, wrote Robinson, we are lousy as dogs (Rappahannock Station, VA, November 10, 1862). Like many soldiers, he missed his wife and children. Poor weather conditions increased his homesickness. We have to sleep on the cold ground with nothing but the blanket over us it is very cold nits, described Robinson. Remember me when you are in the warm bed (Rappahannock Station, VA, November 10, 1862). Sometime in battle, he was seriously wounded and sent to the hospital. Worried, Mary wrote, we all feel very uneasy till we have another letter from you I want to know if you think you shall be to home (Rome, ME, December 23, 1862).

Robinson remained at St. Paul’s Church Hospital until at least March of 1863. Shortly after his letter, he returned to his regiment and commenced fighting. Either by a fresh wound or complications with his prior injury, he was discharged for a disability on July 15, 1863. One hopes that his injury was not serious enough for him to not work and that his pension was enough to feed his family. Between 1865 and 1870, Robinson died leaving behind not only Mary but also their four children. Mary quit housekeeping and managed the farm. Her oldest son George, left for work elsewhere to support the family. Mary was able to keep the farm until at least 1880. There are no other records that indicate what happened to her after that point.

Priest was a 44 year-old private who enlisted in the army on December 30, 1863. He and his regiment, the 3d ME Light Art., joined Gen. Burnside’s Corps in April 1864 and fought at Petersburg. In the letter to his wife, he explains that he and his regiment are marching towards Washington and it would take ten to twelve days to reach the city, being on the move would inhibit his ability to write letters home. Priest mustered out on September 1, 1866.