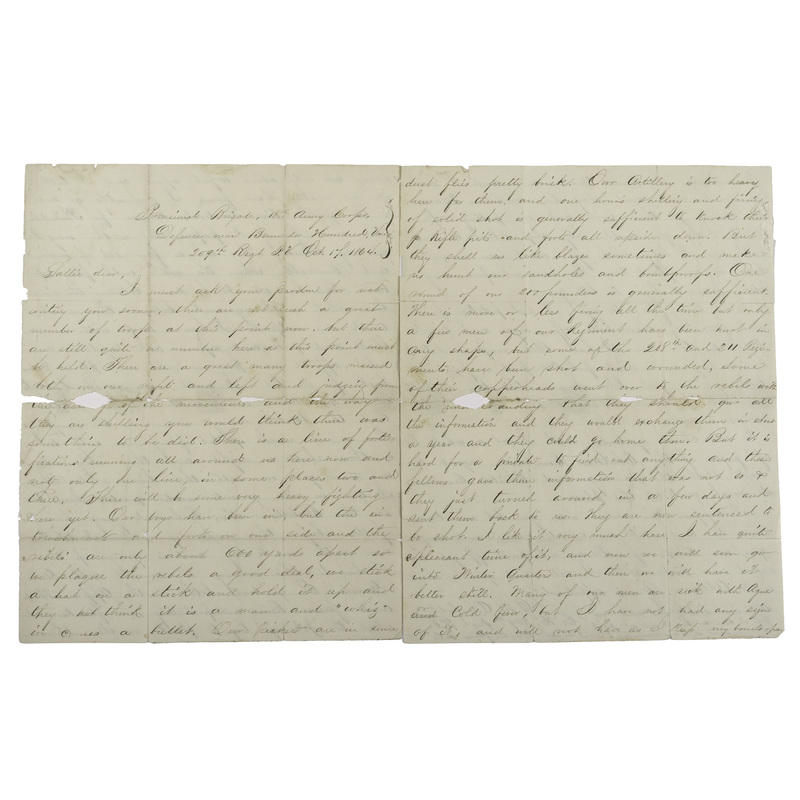 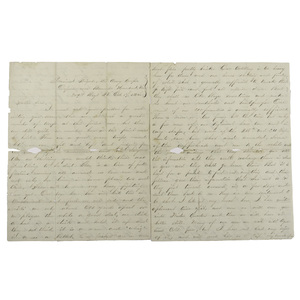 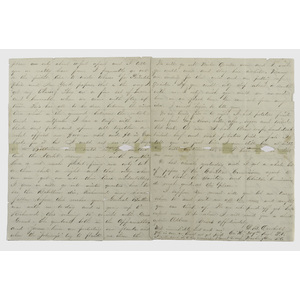 ALS, 4pp, (about 8 x 10”), written in clear legible ink on lined white paper. There are rather severe holes & tears along center horizontal fold line. The letter is also separating along the vertical fold-line at the left side of the lower half of both pages.

In this long letter to his wife, Union soldier Sgt. David B. Ovenholt describes:

*The heavy fortifications, "Sand Holes," and Bombproofs of the Union position

*Heavy artillery bombardments on both sides

*Holding hats up on sticks to draw enemy fire

*Union deserters returned by the enemy and sentenced to be shot

*His good health, the state of his bowels, all the fine food he has to eat & Much More!

Full Transcription of the letter follows:

Sallie Dear,
I must ask your pardon for not writing you sooner, there are not such a great number of troops at this point now, but there are still quite a number here as this point must be held. There are a great many troops massed both on our right and left and judging from the accuracy(?) of the movements and the way they are shelling you would think there was something to be did. There is a line of fortifications running all around us here now and not only one line, in some places two and three. There will be some very heavy fighting here yet.

Our boys have been in, but the entrenchments and forts on our side and the Rebel’s are only about 600 yards apart so we plague the Rebels a good deal, we stick a hat on a stick and hold it up and they think it is a man and “whiz” in comes a bullet.

Our pickets are in some places only about 10 feet apart and I tell you we really have fun.

I frequently go out on the picket line to trade tobacco for Philadelphia and New York newspapers, that is the way I get my tobacco. They are a fine set of men and honorable when we come with flag of truce. This has all to be done between the vidette lines which is the ground between the Rebel and our outposts.

I have a knife with one blade and fork and spoon all together. A Rebel offered me $100 in Rebel and $6 in Greenbacks for it but I could not see it. I bought it in Baltimore and could not get another and the Rebel money is not worth anything. There is not much picket-firing now only two or three shots a night and that only when our men get over into their lines accidentally.

I guess we will go into winter quarters here to see the Rebellion die, Richmond may have fallen before this reaches you, General Butler was with us today and is going up to Richmond this evening to consult with Gen. Grant. The gunboats both in the Appomattox and James Rivers are protecting our flanks and when the “Johnny’s” try to flank us then the dust flies pretty brisk.

Our Artillery is too heavy here for them, and one hours shelling and firing of solid shot is generally sufficient to knock their Rifle Pits and Forts all upside down. But they shell us like blazes sometimes and make us hunt our sand holes and bombproofs. One round of our 200-pounders is generally sufficient. There is more or less firing all the time but only a few men of our Regiment have been hurt in any shape, but some of the 208th and 211th Regiments have been shot and wounded.

Some of their Copperheads went over to the Rebels with the understanding that they should give all the information and they would exchange them in about a year and they could go home then. But it is hard for a Private to find out anything and these fellows gave them information that was not so & they just turned around in a few days and sent them back to us.

They are now sentenced to be shot.

I like it very much here. I have quite a pleasant time of it, and now we will soon go into Winter Quarters and then we will have it better still. Many of our men are sick with Argue or Cold Fever, but I have not had any sigh of it, and will not have as I keep my bowels open.

We will go into Winter Quarters soon and I wish you could come and stay here awhile. Many are sending for their wives and are putting up Quarters. If you could only stop about a month with us. I only wish you could see us, and how we are fixed here. You can not form any idea. I cannot begin to tell you. We are living fine tonight. I had potatoes fried and fresh beef, cheese, butter, coffee, sugar, and boiled Red beats. At noon I had Bean soup, hard-tack, boiled beef and sweet potatoes fried in fat. I tell you we just live. I am still busy at writing and will continue so, as I have none to assist me now. Sometimes we get Cod Fish and Mackeral (?).

I suppose you moved. Will youlet me know where to and write me all the news and everything you can think of. We are not paid off yet but expect soon to be when I will send you a check again. Write immediately and send me $5 in case we should not get paid. I will want it to buy necessaries. I loaned too much away.
Address yours Affectionately
D. B. Overholt
Co. “H” 209th Regt. P.V.
Washington, D.C.

The 209th Infantry P.V. was organized as a 1-year Regiment at Camp Curtin, Harrisburg, PA on 9-16-1864. Officers were Col. Tobias B. Kaufman, Lt. Col. George W. Frederick & Maj. John L. Ritchey. The regiment was recruited from the counties of Cumberland, York, Cambria, Franklin, Columbia, Adams, Lehigh and Lebanon. From October to November 1864, the unit was part of a Provisional Division in the 18th Corp of the Army of the James under General Benjamin Butler.