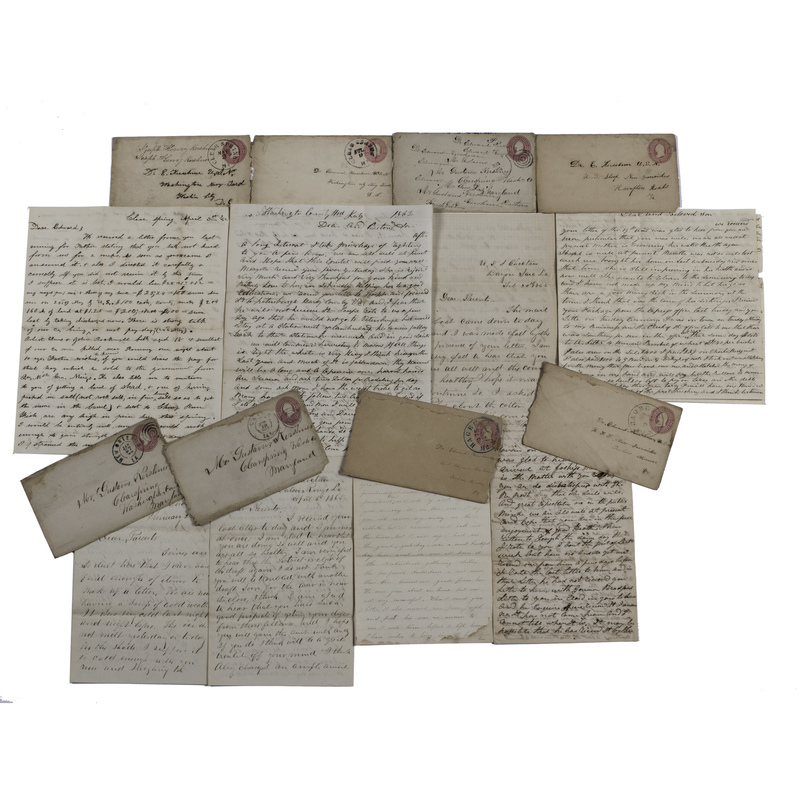 Disgraced by a court martial that stripped him of his position as medical inspector, Dr. Edward Kershner returned to home to Maryland in 1896 a defeated man.  The Navy charged him with “scandalous conduct” when he supposedly wrote to his family “concerning charges of a serious nature” (Medical Record Vol. 61, 1902, p. 539). The claims were unfounded. His friends in the medical community believed the charges brought against him were more based a difference of opinions between Kershner and a high official, presumably Rear Admiral Richard Meade, on the spread of contagious disease. According to the New York Times, however, Kershner supposedly privately forwarded documents to officers that appeared in print and lied in his testimony. “His case was the first time in the history of the service that the courts suspected an officer of perjury, which caused quite a sensation,” wrote the New York Times (New York Times, June 19, 1895). President Cleveland held the case for eight months before giving his verdict to the Navy Department (New York Times, March 20, 1896). Six years later, the Senate recommended he be reinstated twice, and the House of Representatives unanimously voted that he be restored a month before the issue came before the next president. The president pardoned him from the offense and granted him the position of Medical Inspector of the Navy in 1902.

Before the scandal, Keshner joined the military in September of 1861 after completing his medical training from the University of the City of New York. He commissioned as an assistant surgeon in the Navy and served on the sloop-of-war Cumberland that the Confederate ironclad Virginia sank during a battle. The fight cost the Cumberland one third of its crew and almost took Kershner’s life (Roster of Civil War Soldiers from Washington County, Maryland, 119). An unknown marine discovered him unconscious and saved him from the wreckage. He served on several other ships during the Civil War including on the U.S.S. Choctaw, a side wheel steamer converted into an ironclad ram. Aboard the ship he wrote to his parents about a group of 31 Steamboats loaded with troops along with two ironclads headed towards New Orleans whose ultimate destination he believed was some point on the Gulf to Rio Grande or Mobile. (U.S.S. Choctaw, Bayou Sara, LA, February 20, 1865). His family sent him loving messages of encouragement and tried to keep him informed of the events at home. His father Gustav wrote, I hope that your Ironclads will sweep the coasts, cities, towns, and villages from Hamilton Roads to the Rio Grande of all rebellion and all opposition to the Union (Washington County, MD (?), not dated). Kershner’s other brother Joseph also served in the military, but on land.

Joseph H. Kershner enlisted in the army as a private a few weeks before his brother on August 24, 1861. That November, he mustered into the 1st MD Potomac Home Brigade (PHB) Cavl. Robert Elms and John Rockwell both aged 18 and the smallest of our company were killed, wrote Joseph (Clear Spring, April 30, 1862). Joseph avoided that same fate as his friends through the siege of Harper’s Ferry. He was discharged for a disability on March 30, 1863, barely three months before his regiment fought at the Battle of Gettysburg. Their sister Marietta rightfully fretted over her brothers’ safety. Joseph is home but how long he is going to stay I do not know, wrote Marietta to Edward.  I wish he could stay always and never go back to that horrible war are we not going backward instead of forward Eddie. I do not hear much but all I do hear tends to confirm the opinion that the union is lost, but I still hope that is not so (Hagestown, Tenn(?), Oct. 19, 1862). Hope prevailed and the Union succeeded.

After the war Kershner continued to serve and reached the rank of surgeon in 1872 and Medical Inspector in 1890. During his leave from the Navy he worked as the chief of Medical Staff and Randall’s Island Hospital and was Professor Emeritus and Professor of Hygiene at New York’s Post-Graduate Medical School. His reinstatement as Medical Inspector in 1902 was brief. He was forced into retirement when he disputed with superior offices over the use of drinking water during an outbreak of yellow fever in the Windward Islands. He died in 1916.