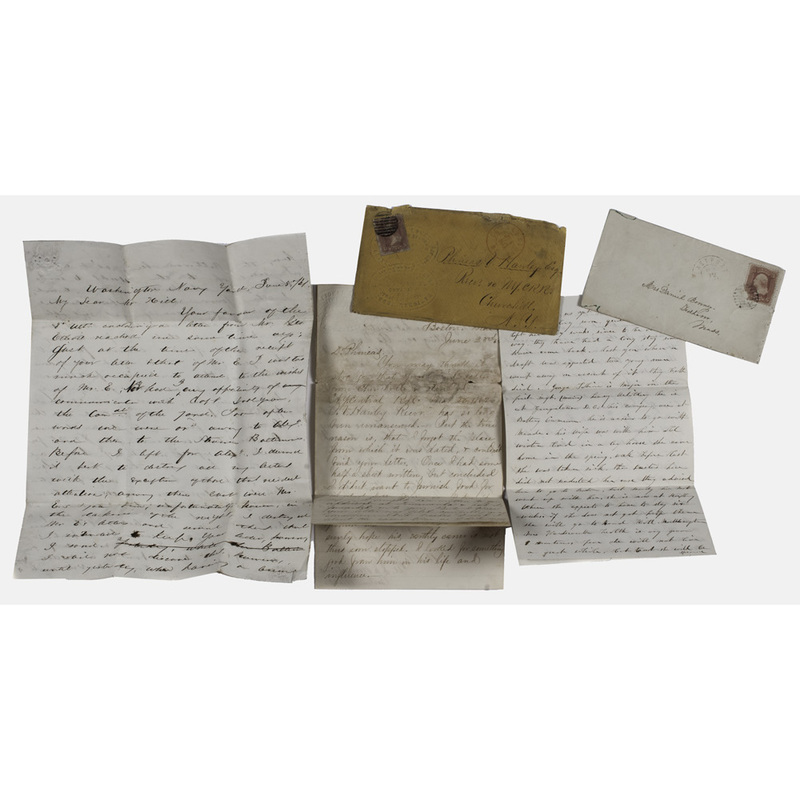 Aboard the USS Housatonic, Paymaster John Wolson wrote a long overdue response to his chum, Dr. Phineas V. Hawley. Allow me to congratulate you on your promotion, wrote Wolson. Hawley, who worked for the NY Central RR, had just advanced his career and assumed responsibilities for the town of Churchill. I don’t know how large [it] is, but whether in a large place and many duties, you are surely on the wad of merit…I really look forward to your rapid promotion, wrote Wolson (June 1862). He continues to write his friend about the city of Boston and its happenings, but concludes his letter with a description of the ship he served. The Housatonic…is a “steam sloop-of-war” of the same 1500 tons burden. Her armament I can’t state, for more reasons than one. Our officers so far, Paymaster always acceptable, are gentlemen—She is a new boat, and is yet unfinished. We hope to get off at farthest by the middle of July. (June 1862)

The Housatonic was finished in November 1861 but did not see her first battle until 1863 when Admiral DuPont’s attempted to take Fort Sumter. She retreated with significant damage, but in subsequent battles she managed to capture many Confederate ships. On a dark night in February 1864, the crew spotted a curious floating object in the distance. Suspecting it was a log or a porpoise, they paid little attention to it. As it came closer, they suddenly realized it was an enemy submarine, the H.L. Hunley. The crew tried to defend itself against attack, but the ship’s size did not allow it to sink low enough to fight effectively against it. The Hunley rammed an explosive charge into the ship’s starboard side. The Housatonic sank within ten minutes.  It was the first and only attack made by the Hunley as well as the first successful submarine attack.

An ALS from an unidentified sailor on an unknown ship.

Although we do not know the details of his service or the name of the soldier’s ship, he writes to his cousin in Massachusetts about several of his friends including, Joseph Cary, the executive officer on board the USS Shockoken. The sailor wrote,

She is 50 tons, has a complement(?) of 120 men and a battery of six guns 24.6 30 powders it is an andams(?) portion and requires a man of experience and ability to fill it properly everything has to go through [Cary’s] hands and he has to attend to all the artillery both at the guns and with small arms. He is very anxious to get her in good fighting order so if she is in an engagement they will give a good account of themselves (Eastport, August 7, 1863).

There is no other information on the record of service of the Shockoken, but in May 1865 the New York Times published an article about the public auction of many steamers that served in the Civil War. Listed among them was the Shockoken. It reads,

At 11 o'clock yesterday morning, by order of the Commissioners of the Sinking Fund, the right to establish a ferry from the foot of Spring-street to Hoboken, New-Jersey, at the point where the old ferry was established, and to maintain the same for a term of ten years from the 1st of June next, was offered at public auction in the Governor's Boom, City Hall.

The landing-place on this side is furnished by the city and on the other side by the purchaser. (http://www.nytimes.com/1865/05/30/news/workingmen-s-union-grand-demonstration-yesterday-day-jones-wood-sixteen-thousand.html?pagewanted=all).